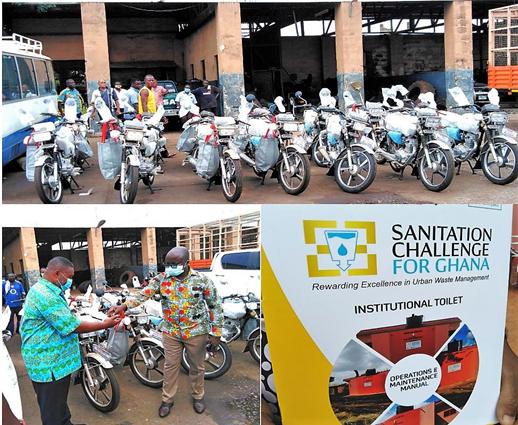 The Kumasi Metropolitan Assembly (KMA) has asked the environmental and sanitation units to up efforts at keeping the metropolis clean.

Mr Osei Assibey-Antwi, the Metropolitan Chief Executive (MCE), said they should be firm in the discharge of their duties – ensuring that those who breached environmental-sanitation by-laws were dealt with accordingly.

He said the Assembly in support of the work of the units was procuring the requisite resources to strengthen the campaign to restore the metropolis to its former status as the ‘Garden City of West Africa’.

Mr Assibey-Antwi, presenting 15 motor bikes to the units at a ceremony at the Waste Management Department, Kumasi, said enforcement of the law was the only way the citizenry could be compelled to do the right thing.

The items were bought from the Assembly’s prize money won in the recent ‘Sanitation Challenge for Ghana (SC4Gh)’ competition.

It was organised jointly by the Ministry of Sanitation and Water Resources, Maple Consult and Ideas to Impact, as well as IRC-Ghana and the United Kingdom’s Department for International Development (DFID).

Mr Assibey-Antwi indicated that the KMA intends to make its environmental health officers more mobile for effective work, especially as the rains set in, which comes with the added responsibility to tidy up Ghana’s second-largest city to prevent communicable diseases.

“We cannot afford to add up to the challenges already being posed by the COVID-19 (coronavirus) pandemic,” the MCE noted.

Consequently, the five sub-metropolitan areas under the KMA should constantly clear of filth the drainage system in their jurisdictions.

They should also remove overgrown weeds and related nuisance which served as breeding grounds for mosquitoes and other bacteria.