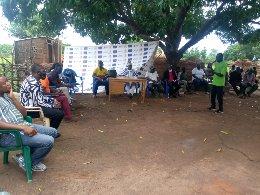 The people of Kobi-Basinparu community in the Lambussie District of the Upper West Region are in dire need of potable water and electricity to improve their living conditions.

The community also wants their only silted dam to be dredged to allow it to store enough water for them to be able to engage in dry season farming activities.

This came to light during a social auditing engagement for a community empowerment forum organised in the community by the National Commission for Civic Education (NCCE).

The social auditing engagement is part of the implementation of the European Union-funded project dubbed “Accountability, Rule of Law and Anti-corruption Programme (ARAP).

A seven-member Social Auditing Development Implementation Committee was formed to lead the process of mobilizing community members for self initiatives while also lobbying the Lambussie District Assembly and other development partners to come to their aid.

Mr Paul Ganvu, the Lambussie District Director of NCCE noted that the social auditing process was for social engagement, transparency and dissemination of information leading to greater accountability from duty bearers.

He added that social auditing engendered social participation which empowered the citizenry to initiate their development programmes through the Social Auditing Development Implementation Committee.

Mr Ganvu, therefore, thanked the community for their resolve to initiate their projects to address their needs and appealed to the Assembly and other development partners to come to the community’s aid.

Kuoro Issakah Tanjie II, the Paramount Chief of Lambussie Tradition Area praised the NCCE and the EU for the ARAP project, noting that it was essential for national development and governance.

He advised the committee to learn how to communicate and lobby effectively with development partners to help address the needs of the community.