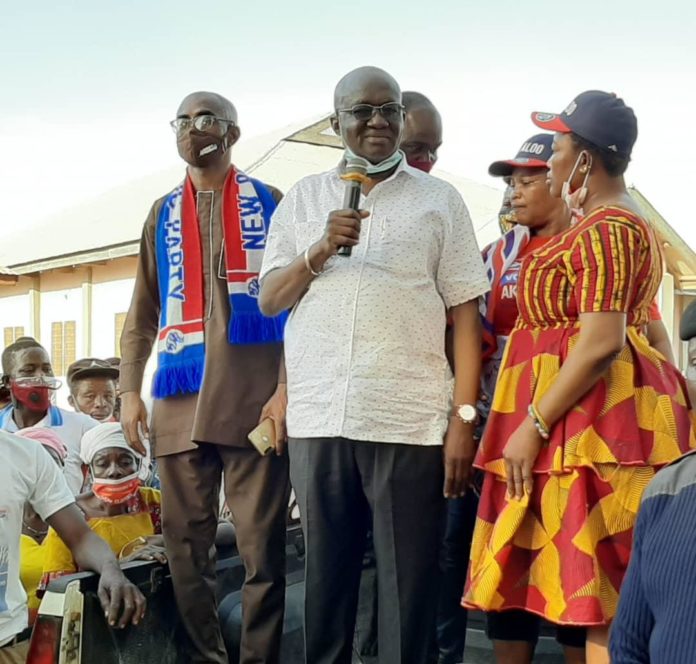 Mr Joseph Kofi Adda, the Member of Parliament (MP) for the Navrongo Central Constituency in the Upper East Region has declared support for Mr Robert Apechira Aloo, the Parliamentary Candidate (PC) for the Chiana-Paga Constituency.

The MP joined supporters of the New Patriotic Party at Chiana for “health walk,” and called on Pe Ditundini Adiali Ayagitam III, the Paramount Chief of the Chiana Traditional Area.

Mr Adda, who spoke to the Ghana News Agency (GNA) after addressing Constituents in the local dialect, ‘Kasem’, said “I joined them to show solidarity as my commitment to help them to win the seat in the Chiana-Paga Constituency.”

He said most of the youth from the National Democratic Congress (NDC) in the Constituency had joined the NPP, and explained that “They have seen somebody they can identify with, a young active man, who was a banker, worked with Standard Chartered Bank, and later with Stanbic Bank.”

Mr Adda, who is the Minister of Aviation, said Mr Aloo had over the years supported him right from his (Mr Aloo) days as a student at the University of Ghana, Legon.

“Now that is his turn and he wants to serve his Constituency, I felt it is obligatory, and also because of the faith and trust I have in him as a potentially good Candidate who can serve the people of the Constituency.

“I went through the health walk with them and addressed them. I recalled their minds to the good things that the Nana Akufo-Addo’s government has done for the country. Chiana is particularly a place in the Kassena-Nankana area where public school education system started,” Mr Adda indicated.

He emphasized the need for the educational system to be strengthened further beyond the current situation, saying “Based on the good policies of Akufo-Addo, the Free-SHS and school feeding programme are policies that they have benefited from.

“I personally also helped to construct some boreholes in that area. So many good things have come to the area for them to see and know that the government is there to serve them and to improve their lives.”

The Aviation Minister said since Ghana gained independence, Chiana, which was part of Paga and the eastern area of the Constituency had never had an MP.

He noted that the PCs for the two main political parties, the NPP and the NDC, Mr Aloo and Mr Thomas Dalu were both from Chiana, adding that even though it was Mr Aloo’s first time, “he has shown some real drive and zeal and has some exposure.”

Mr Adda called on Constituents to cast their votes on December 7 in favour of President Nana Addo Dankwa Akufo-Addo to retain his seat and vote for Mr Aloo as their MP to continue with the development of the area.

The PC who also addressed supporters, in the local dialect later told the GNA that Mr Adda’s support for his Candidature was “Good and welcoming news, he is a father to the Chiana-Paga Constituency, very experienced politician and the people look up to him.”

The PC, referred to Me Adda as a father, and stressed that “To have a whole Aviation Minister who is also an MP supporting me, means I have people who are behind me.”

The Paramount Chief, Pe Ayagitam III urged leadership and supporters of the Party to be mindful of the COVID-19 protocols as they went about their campaigns and prayed for the blessings of the gods of the land for them.