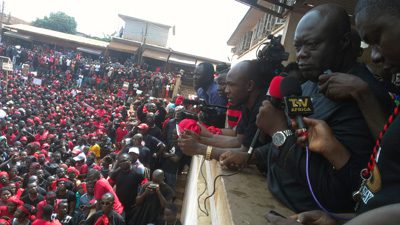 He said suffering had become the order of the day since the National Democratic Congress (NDC) assumed the mantle of political leadership in the country, adding that the suffering of the people was getting worse under President Mahama.

He said if men would not open their mouths to condemn the government?s bad deeds, then the women should take over the responsibility to help free Ghanaians from their ordeal.

Addressing a sea of demonstrators at Abbey?s Park in Kumasi on Tuesday, the ex-MP said Ghanaians deserved to be treated better and so the government should be sensitive to their plight.

Kofi Jumah noted that the NDC administration, especially, President Mahama?s, was not up to the task of managing the country and so the electorate should vote massively against it in 2016.

The outspoken former MP lambasted the Chairman of the Electoral Commission, Dr. Kwadwo Afari-Gyan, for being the cause of the excessive suffering that the millions of Ghanaians are going through.

He maintained that the NDC did not win the 2012 general elections, alleging that the EC, particularly Afari-Gyan, ?massaged the electoral results to hand an underserved victory to the NDC.?

Filled with anger, the former NPP MP cursed Dr. Afari Gyan, saying that the EC boss would definitely suffer severely over the roles he played in the declaration of the results of the 2012 presidential election in favour of Mahama.

He said the NPP has no intentions of going to the court any longer to contest any results of the 2016 elections, stressing that ?the NPP has no confidence in the court? for any fair ruling.

Mr. Jumah said the NPP would go all out and campaign vigorously in order to garner a first round victory in 2016, urging the party?s supporters to always work hard.