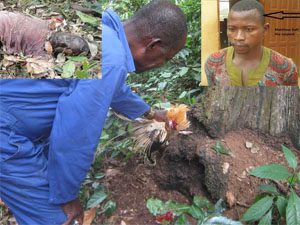 The chiefs and elders of Sefwi Essakrom, near Sefwi Asawinso in the Western Region, on Sunday, January 5, performed some rituals to pacify the gods of the land after a 35-year-old man was murdered in the farming community last December.

Iddrisu Ollo, a native of Kalba in the Sawla-Tuna-Kalba District of the Northern Region, who undertook his cattle business in the Sefwi Asawinso area, was gruesomely murdered on December 30, 2013 in the Kokrosu Forest Reserve at Sefwi Essakrom.

According to the chiefs and elders, since that was the first time such a barbaric incident had happened in their traditional area, the land had been desecrated by the dastardly act and so they needed to purify the land to avert any future calamity from the gods.

The chiefs and people of the farming community, who were shocked at the gruesome murder of Iddrisu Ollo, on Sunday, January 5, 2014 went to the forest reserve to perform the purification rite by slaughtering two sheep, two cocks and pouring libation with two bottles of schnapps.

The suspected murderer, one Matthew Kofi N-yo, 26, also called Kofi Dagarti, a settler farmer at Sefwi Essakrom and a native of Kalba in the Northern Region, is currently being held by the police.

Narrating how the unfortunate incident occurred, a family source told DAILY GUIDE that the deceased, Iddrisu Ollo, was a nephew to one Abdul-Salam Sobom, a farmer and cattle dealer in Kalba.

It added that Mr. Sobom normally sent his cattle to Kumasi and Techiman for sale, and that somewhere in 2013, Mr. Sobom was approached by the suspect, Kofi Dagarti, for some of the cattle to go and sell at Sefwi Essakrom and its surrounding communities.

Without hesitation, Mr Sobom gave the suspect 10 cows to go and sell because he dealt with him in 2012.

Mr. Abdul-Salam Sobom then asked his nephew, the late Iddrisu Ollo to accompany Kofi N-yo to Sefwi Essakrom so that after the sale of the cattle, Iddrisu Ollo could take the money and bring it to Kumasi where he (Sobom) was also selling some of the cattle.

After the sale, the suspect gave part of the money to Iddrisu Ollo to send to the uncle in Kumasi leaving some balance which was to be collected from the buyers of the cattle before the end of the year, 2013.

DAILY GUIDE gathered that on December 28, 2013, Kofi N-yo called Mr. Sobom on phone and assured him that he would give the money to his nephew, the late Iddrisu Ollo to bring to him on December 29, 2013.

Mr. Sobom then called the suspect in the morning of Sunday December 29, 2013 to find out if he had given the money to his nephew, Iddrisu Ollo, and the suspect answered in the affirmative.

However, in the evening, at about 6:00pm on the same day Ollo called his uncle and told him that the suspect did not give him the money. This made Mr. Sobom suspicious of Kofi N-yo.

The next day, Mr. Sobom could not reach his nephew on phone and did not know his whereabouts.

News of the death of Iddrisu Ollo

As Abdul-Salam Sobom was making frantic efforts to trace his nephew, he received a call from one Mr. Kanyiri, a relative and also a settler farmer at Sefwi Essakrom at about 7:30pm on Monday that the nephew had been found dead on the farm of Kofi N-yo near the Kokrosu Forest Reserve at Sefwi Essakrom.

How The Body Was Found

The paper learnt that some children had gone to look for firewood and food crops from the farm when they saw the dead body of a human being lying in the farm of the suspect. They then ran to inform the elders.

Since the chief was not around, the linguist, Okyeame Tanoh and some people went to the forest and found the lifeless body with multiple cutlass and gunshot wounds. They later reported the incident to the chief of Essakrom, Nana Andotweretwie Ababio.

They then made a report to the police at Sefwi Asawinso who went to the scene with the elders and youth of the town to identify the body as that of Iddrisu Ollo. The police then conveyed the body to the Juaboso Government Hospital for embalmment and autopsy.

Suspect Arrested In A Hotel

While a search for the suspect was ongoing, someone had a hint that he was hiding in a hotel at Sefwi Asawinso and so the people mobilized and stormed the hotel and apprehended the suspect.

But for the timely intervention of the police, Kofi N-yo would have been lynched.

DAILY GUIDE gathered that the body of the late Iddrisu Ollo was buried on January 2, 2014 at Sefwi Essakrom, but the funeral rites would later he held by the family later in his hometown in the Northern Region.