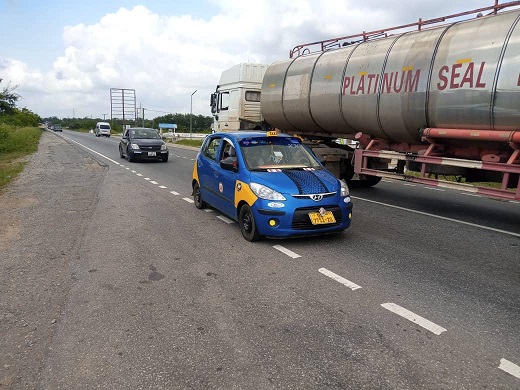 The Koforidua-Somanya Road is now opened to vehicular traffic after a section under construction along the Kobokobo Community in the Okere District was cut off due to continuous downpour.

Heavy rains during the week caused considerable damage to portions of the road, disrupting vehicular movements and leaving commuters stranded.

The downpour caused havoc in many parts of the Eastern Region, resulting in the Afiafi Stream, which flows downstream the Kobokobo Community, overflowing its banks and destroying the side diversions of the road, disrupting human and vehicular movements.

The contractor, currently on site at the Nkurakan-Amanfro-Adukrom-Somanya Junction, had made temporal side diversions, which allow commuters to go about their normal duties.

The diversions are to make way for a permanent bridge to be constructed over the stream for easy flow of traffic.

Briefing the Ghana News Agency on the situation, Mr Daniel Kenneth, the Okere District Chief Executive (DCE), said contrary to a video circulating that commuters had been stranded since Wednesday, a diversion route had been created from Amanfro, two communities from that section, through Nkyenoa-Asifaw-Lakpa to Asamang, to ensure the free movement of commuters.

He said the video, which portrayed a shoddy work by the contractor, was unfortunate and wondered what the motive was.

Mr Kenneth assured the public that works on the over 20-kilometre road from Nkurakan-Amanfrom-Somanya was on course and commended the engineers and the contractor for doing a good job, considering the progress made so far.

He apologised to commuters for the inconvenience caused due to the long route of diversion adding that the work was progressing steadily and would be completed on schedule.

When the GNA visited the area Thursday morning, the contractor and his men were busily working to fix the damaged portion to ensure free flow of traffic.