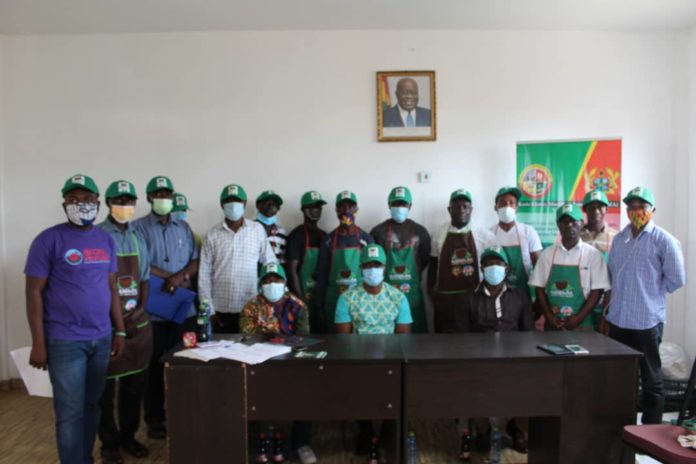 The Korle Klottey Municipal Assembly (KOKMA), in partnership with Jekora Ventures Limited has begun the Coconut Waste Green Economy Project for Coconut vendors within the Municipality.

The project is aimed at ensuring a clean environment within the Municipality and the Greater Accra Region as a whole and providing a source of identification to the vendors.

Mr Victor Acquaye, Director, Environmental Health and Sanitation Unit, KOKMA said the assembly identified that coconut waste was not compressible and as such found its way at unauthorized places and decided to engage Jekora Ventures to support.

He said “coconut has so much value and can be processed into something else. So we have organized and engaged the vendors to ensure that they operate in a very hygienic conditions and at the same time for the Assembly to get access to the waste, which would end at a factory for recycling into other useful products.”

He said the assembly earlier organized and built their capacity on the coconut value chain right from the farm to the time it got to the final consumer.

Mr Acquaye said vendors, not complying with the directives would not be allowed to sell, because as their waste would not be collected and the Assembly would not achieve its objectives.

He said “we have a system in place to be collecting the coconut waste regularly at a fixed price in order to sustain this. And we also have plans for next year to get the plastic waste on board as that can also generate jobs.”

Mr Edward Awuye, a Representative of Jakora Ventures said the personal equipment presented to the vendors was to ensure they looked more presentable to consumers and in the long run recycle the waste into reusable goods.

He said it would reduce volumes of waste taken from Accra to the land field site. “We at Jekora believe that waste is raw material for other things, so we are just trying to support anyone who needs these raw materials to be recycled and reused.”

Mr Awuye hoped the pilot would serve as a basis for other assemblies to emulate, to coach them to do the samething to reduce waste.