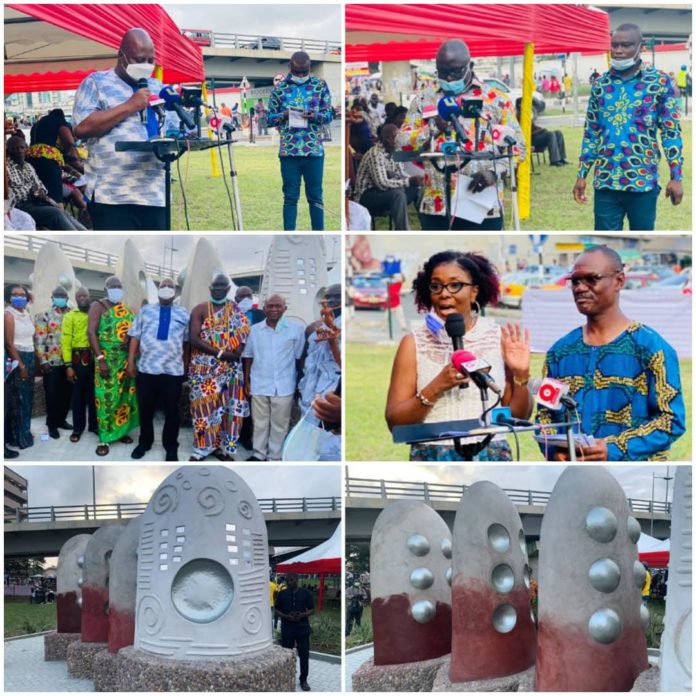 The Korle Klottey Municipal Assembly (KOKMA) has commissioned the first phase of sculpture, under the packaged project of the Metropolitan Sculpture Series.

The project which was in collaboration with a US-based Ghanaian Sculptor, Mr Ernest Aryee, falls in line with the greening and beautification of the capital city, Accra.

Mr Samuel Nii Adjei Tawiah, Municipal Chief Executive for KOKMA said the sculpture had valuable history hinging on the cultural heritage of the Ga state and for that matter had a good story to tell and to add to the portrayal of their existence as Ga people.

He said this was just the first phase as several other locations and spots within the Municipality had been identified for similar projects to add to the President’s clarion call for Accra to become a clean city.

Mr Tawiah said the assembly believed that a clean city was not only about environmental sanitation but it also includes value addition.

He said the Assembly collaborated with Mr Aryee and his team who had an idea and felt it was appropriate to showcase some of their talents and handy works which were all over beyond the shores of the country in his own motherland Ghana.

Mr Ishmael Ashitey, the Greater Accra Regional Minister said monuments such as these sculptures add a lot of value to the rich history and cultural heritage of the people especially when the background of the story portrayed by the pieces had its roots in the same local environment.

He said this attraction could only be meaningful if the environment within which these sculptures were situated was kept very neat.

Mr Ashietey said every effort must therefore be made to keep the city very clean and tidy at all times to attract the needed tourism.

“The culture of maintenance that has always been a challenge for us as a people must be a thing of the past if we want to derive maximum benefit from this facility.”

He encourage the Assembly to complete all the pieces that had been lined up to ensure that the laudable objective of beautifying the city was fully realized.

Mr Ernest Aryee, the lead Sculptor said the three sculptures were made in miniature forms about 24 inches, and it dates back to the 1990s.

He said once the opportunity for collaboration with the Assembly came, they were trying to look around for something that they all could relate to. These sculptures came up and as a team, they made a collective effort towards it.

“Everything you see, the colours, shapes, repetitions have great significance to the history of the Ga people. From their migration from the East to how they settled in the West.”

He said they teamed up using formally educated artists with their traditionally non-formally educated craftsmen. “We combined with welders, masons, metal formers, carpenters, and shared ideas and finally came up with these sculptures, as well as mobilized donors of every category.”

Mr Aryee called on Ga’s to rise and adhere to their traditions and use them as a way to educate themselves. “We as gas happen to be in the periphery, we do not want to get to a place where we would lose our story and our place so we must take our heritage seriously and invest in the arts.