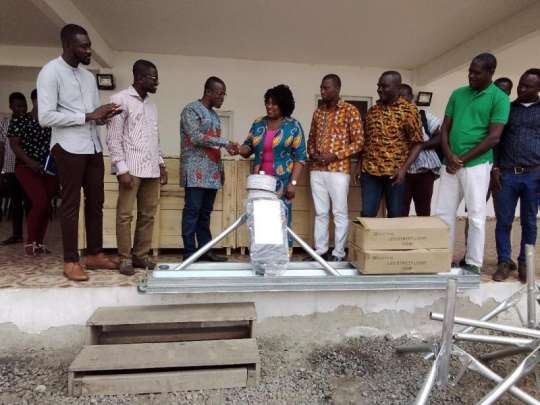 The Ghana Association of Visual Artists (GAVA) in collaboration with the Korle Klottey Municipal Assembly and the Accra Metropolitan Assembly will from February 5, begin the first phase of the Ako Adjei interchange Mural as part of the Accra Beautification Project.

The project is designed to show visuals that depict Accra as the capital city and the gateway to Africa as well as project the culture of Gas with particular emphasis on chieftaincy, commerce and other elements interspersed with other cultural elements in Ghana with few from around Africa which has similarities.

Madam Christine Dadson, Executive Assistant to the Korle Klottey Municipal Chief Executive said as a new assembly they were ready to make a difference in beautifying Accra.

She said the Assembly was ready to make the declaration of the President of making Accra the cleanest and beautiful city in Africa a reality.

She said it was in relation to this that the Assembly was providing the necessary logistics needed by GAVA to undertake this project as a way of beautifying the city.

“If Accra is beautiful it is for everyone’s benefit, and this project would not stop after this but it’s going to continue and would be improved over time.”

Nana Otuo Owoahene Acheampong, President GAVA, said as part of beautifying and building the city of Accra and Ghana at large, GAVA mooted the idea and shared the concept with the two assembly’s.

He said the project, facilitated by the Creative Arts Council was targeted at various parts of the city including the Ako Adjei interchange, Efua Sutherland park, Liberation Circle, Danquah Circle, High Street and Kwame Nkrumah Circle.

He said the first part is the Ako Adjei Interchange, which would commence on February 5, and expected to be completed and unveiled in four weeks’ time to coincide with the celebration of the 63rd independence anniversary celebration.

Nana Owoahene Acheampong said these murals shall be executed to blend into the environment, from both southern and northern ends of the bridge thereby transforming Ako Adjei Interchange space and making it a focus of attention in the capital city of Accra.

The theme and the concept for the proposed murals situated on the two walls of the south end of the bridge, is to portray through art and Ghanaian symbolism, Accra as the Nation’s capital with diverse cultural values with particular emphasis on symbolism of the ethnic Ga’s, which were not well known in Ghana.

“The primary objective for the use of these designs for the murals, is to introduce the symbols into our everyday activities to serve as a key, basic design instrument in almost all things we do as a
people.

These designs can help enrich our fabric of our building presentation, as well as enrich our designs in various media just as the Adinkra has done for us over the years. Thus on visiting Accra, one would be able to identify with something which is purely of Ga origin.”

Nan Owuohene Acheampong said the theme for the north end of the bridge revolves around the culture of the Ga’s. It takes a look at their dressing, coiffeur, scarification, tradition, dances, religion and festivals.

“The sea is one of assets the Gas have been blessed with. The Beach scenes draw the attention to the activities of the Gas.

As you drive over the bridge from the western side [GBC] and the eastern side [Police Headquarters] you will thus be passing through an area where the left and right sides of the road will be adorned with these two murals which with their natural colours draw you close to the people and their coast line activities.”

“The eight pillars of the bride will have one common theme running through. This will be made up of acrylic colours cladding the base with painted symbols adorning the middle and tops.”

He thanked the assembly for the support, and assured the assembly that their expects were ready to deliver on their mandate, expressing the hope that other assemblies would take a cue from this and identify spaces from their enclaves for same to be done in their municipality.

Deputy Speaker: Balance your requests from Government with responsibilities