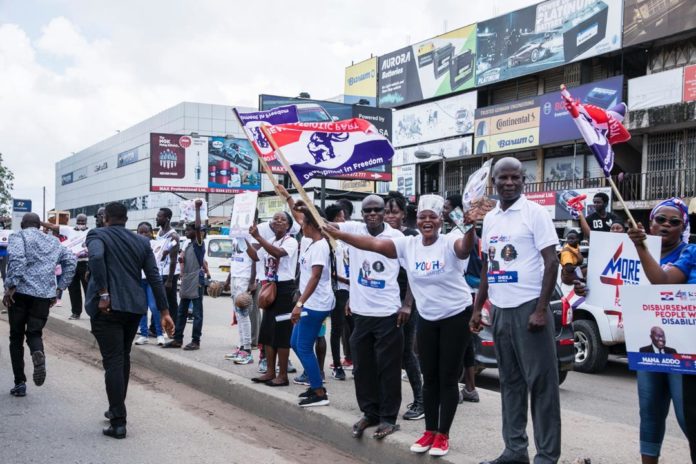 Spare Parts Dealers at Kokompe, near Darkuman have expressed their support for the Akufo-Addo led government, indicating their votes for the NPP in the December elections.

Nana Asiedu, Chairman of the dealers told First Lady Mrs Rebecca Akufo-Addo who visited them as part of her campaign tour of the Ablekuman North Constituency, that they have resolved to grant their votes once more for President Akufo-Addo to continue to do more for Ghanaians.

He particularly, praised the First Lady Mrs Rebecca Akufo-Addo, for her unflinching support to Ghanaian women and children, commending her for providing support and services to communities around the country.

“There have been many first ladies in Ghana, you surpass them all”, Nana Asiedu said.

Nana Asiedu, however, requested for financial support in the form of loans for the artisans and traders at Kokompe to boost their trading activities, which had been so badly affected by the COVID-19 pandemic and restrictions that accompanied it.

Mrs Akufo-Addo promised to tell the President about the request of the dealers, assuring them that she would personally make sure that they get the assistance they needed, and possibly, part of the COVID-19 stimulus packages.

She said the over 200 factories, built under the One District One Factory initiative as well as the NABCO programme have provided more jobs for Ghanaians while the free Senior High School programme had helped many Ghanaian families to send their children to secondary school without so much stress.

She, therefore, appealed to the people in the Constituency to vote massively for President Akufo-Addo and the Parliamentary candidate of the area, Ms Sheila Bartels.

Meanwhile, traders at the Odorkor and Mallam markets have also declared their support for the NPP, saying, they would vote for the government to ensure that they stay in power for four more years.

“We are very much in support of this government in that, its successes within the four years are remarkable and compared to none,” Aunty Korkor, Odorkor Market Queen stated.

She also thanked the First Lady for her visit and appealed to the government to give the Odorkor market a facelift in their second term.

In declaring their support for the NPP, Ms Elizabeth Naa Lamile Lamptey, the Mallam Market Queen, appealed for temporary structures for the traders and called for measures to be taken to build a modernised market for them.

She also appealed for financial assistance for the women to boost their trading.

The First Lady assured that she would alert the President to ensure that the traders got some of the COVID-19 stimulus packages for their activities.

Mr Kofi Ofori, the Municipal Chief Executive, promised that the untarred road leading to the Odorkor market would soon be fixed together with the drains, as well as that of the Mallam market.

Ms Bartels, on her part, urged the constituents to vote massively for the Constituency to attain their 80,0000 targeted votes agenda for the NPP in the area in the 2020 elections.

Mrs Akufo-Addo rounded up her campaign in the Constituency, with a mini-rally at the Kwashieman cluster of School park, which was attended by various chiefs in and around the Constituency as well as many Party faithfuls and sympathizers.

The rally was also addressed by Mr Kwamina Bartels, a former MP for the area, Mr Mike Ocquaye Jnr, Ghana’s Ambassador to India, Ms Akua Afriyie, outgoing MP, and Ms Bartels, all of which emphasized the need to keep the NPP in power for four more years to do more development and social interventions for all Ghanaians

The rally was also attended by Justice Joe Appiah, a former MP of the Area, Ms Elizabeth Sackey, Deputy Minister of Greater Accra Region, and other party officials of the Constituency.