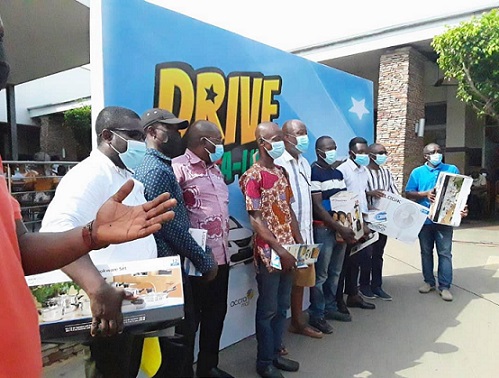 The Kokrokoo Charities Foundation has rolled out a mechanism, to mobilise funds to buy 65 more incubators to support the care of pre-term babies across the country.

The Kokrokoo Charities Foundation, in collaboration with Toyota Ghana Limited, has rolled out a drive with which a brand new Toyota Starlet car would be awarded to the ultimate prize winner with other consolation prizes including; generator sets, standing fans, blenders, pressing irons, and cookware.

At the first draw, held at the Accra Shopping Mall that saw 10 winners who entered the raffle through *713*70#, Mr Kwami Sefa Kayi, a broadcaster and founder of Kokrokoo Charities Foundation, a Non-Governmental Organization, said the foundation through it’s “Project 100” initiative had already supplied 35 incubators to hospitals across the country.

He said the project, birthed in 2014 to help reduce infant mortality in Ghana through the purchase and installation of 100 incubators at a cost of $10,000.00 each, was left with 65 more Incubators to meet its target.

He said the project had so far purchased and installed the incubators in 22 regional and district hospitals nationwide and supported other neo-natal needs in selected hospitals.

He said the draw was still opened and participants were expected to dial *713*70# and follow a three step prompt to donate towards the project.

“While making multiple donations increases one’s chances of winning, one essentially contributes towards raising funds for the purchase of incubators to save the lives of infants,” he said.

He said the ultimate winner of the car would be randomly selected and presented with the Toyota Starlet in upcoming draws.

Mr Dennis Adumtwum, Programmes Manager, Kokrokoo Charities Foundation, said the first 10 winners were randomly selected out of the first 2,000 participants and that, three more of the draws would be held before close of the year.

He emphasized that all the draws were being held in recognition with the COVID-19 safety protocols, adding that the next draws would be held on July 1, August 4, and September 21, 2021 respectively.

Mr Jerry Mensah, National Sales and Marketing Manager, Toyota Ghana, said the campaign provided participants the opportunity to save an infant life while his company also strived to support worthy course such as the one being undertaking by the Kokrokoo Charities Foundation.

Mr Daniel Arthur, a participant and a winner of a cookware set said his target was the car, but all the same, “l am glad to have participated to help a worthy course.

“I will continue to donate and I know I will win the car.”Other participants won items which included; pressing irons, standing fans and blenders.”