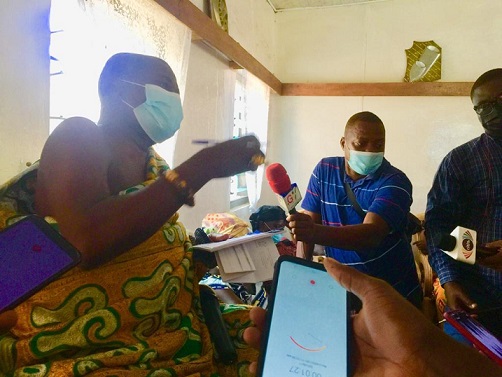 Nana Kojo Kru II, the Chief of Komenda, has appealed to the Government to rehabilitate the road networks in the area to make transportation of people and goods to other human settlements less cumbersome.

He said the deplorable nature of the roads in the area, was not only making living conditions difficult for the people, but had also become a haven for armed robbers and other criminals.

Nana Kru II, made the appeal when the Central Regional Minister, Mrs Justina Marigold Assan called on him and the Traditional Council as part of a day’s tour to the Komenda-Edina-Eguafo-Abrem (KEEA) Municipality to officially introduce herself to the chiefs and solicit their support to transform the Region.

He said most people in the area were becoming disillusioned and frustrated by the numerous promises from politicians.

Nana Kru commended the government for initiating a landing bay as well as sea defence project for the area, but called on it, to revive the defunct Komenda Sugar Factory to reduce the unemployment and crime rates in the Town and its surrounding communities.

He called on the Environmental Protection Agency (EPA) and Forestry Commission (FC) to ensure that the forest reserves in the Municipality were protected as some perpetrators had started cutting down the trees for their own selfish gains.

Responding to the Chief’s appeal, Mrs Assan assured that the government was working tirelessly to revamp the factory to boost the economy and enhance the standard of living of the people.
She said, the factory had been given to investors and the necessary approaches being facilitated to bring the Factory back to life.

The Minister and his entourage also visited all the three paramouncies in KEEA, the Edina, Abrem and Eguafo Traditional Councils where she formally introduced herself as the new Regional Minister and interacted with them on the way forward to transform the Region.

Mrs Assan said the revival of the factory remained key to Government’s broader objective of creating a congenial business environment to attract, retain and create sustainable direct and indirect jobs for the youth of the area.

The Minister also addressed a durbar of Assembly members and staff of the KEEA where she admonished all Metropolitan, Municipal and District Assemblies (MMDCE’s) to re-dedicate themselves to working to promote the welfare of the people.

She said Assemblies were clothed with authority to initiate programmes and development policies and to deal with issues affecting development in their localities.

Mrs Assan urged them to move from their comfort zones of relying on Government’s limited subventions and find innovative ways to bring increased and sustained development to the people.

To remedy the insanitary conditions in their localities, she tasked the Assemblies to prioritise sanitation and embolden the sanitation inspection division to enforce strict environmental cleanliness practices to improve public health.

Mr Appiah Korang, Acting Municipal Chief Executive (MCE), expressed his readiness to partner the private sector and other stakeholders to propel the growth of the area to make KEEA a model municipality.