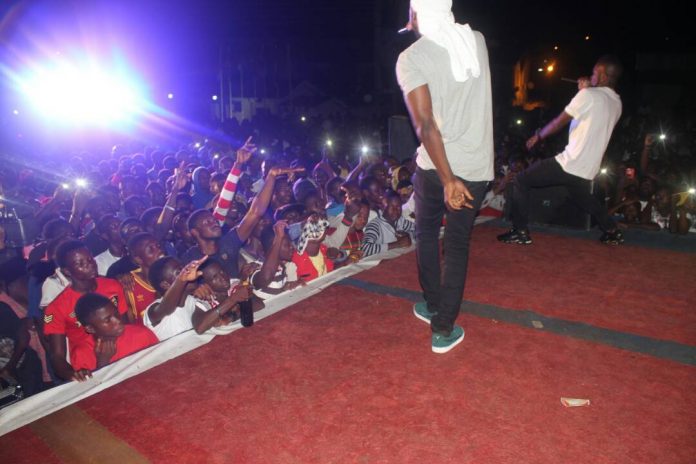 Koforidua was charged up over the weekend when rapper Koo Ntakra officially launched his second studio album titled ‘KOK’ in the Eastern region capital.

The ‘King of Kofcity’ crooner together with some big shot names in the game including Yaa Pono and D Cryme brought the streets of Koforidua old estate to a standstill for over six (6) hours of non-stop musical experience at the popular Dadi’s bar enclave.

Koo Ntakra took to the stage in three separate appearance on the night, performing all the 17songs that make up the ‘KOK’ album, as well performed together on the same stage songs like ‘Stronger’ with Kay Spunky, ‘Had I known’ with D Cryme and ‘Girls’ with Yaa Pono for the first time to the admiration of the over five thousand charged crowd gathered at the open venue.

Just an hour to the start of the event, the heavens opened heavily for almost 45minutes but the rains could not deter the anxious Koforidua crowd who has waited all these years to celebrate with the Eastern Music Artist and Rapper of the year winner.

Koo Ntakra’s ‘KOK’ Album went online exclusively on the same night on the aftown music app for purchase, streaming and download. And will be made available worldwide across most music digital shops by Ignite Creatives in the coming week.