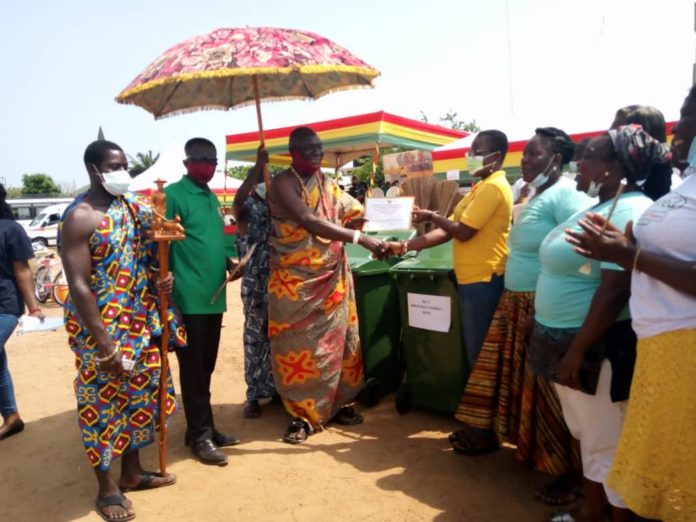 The Korle Klottey Municipal Assembly has organised its maiden farmers day celebration with the call on the youth with an abundance of unearthed talents to venture into other forms of businesses in the area of agriculture.

The Municipal Chief Executive, Mr Samuel Nii Adjei Tawiah said although the geographical location of the municipality was not agriculturally friendly, due to the unavailability of land, the youth can explore other aspects of agriculture to develop the economy.

He said as an Assembly, which was bearly one year and eight months old, the celebration of their maiden Farmers‘ Day Celebration would go a long way to equally encourage people to venture into agriculture especially fishing.

He said the theme for this year’s celebration: ” Ensuring Agribusiness Development under COVID-19; Opportunities and Challenges”, was a wake-up call to citizens of the country to embrace agricultural-related businesses in several dimensions and forms to ensure that Ghana became self-sustainable in the supply of food requirements.

Mr Tawiah said to achieve this, there was the need for most of the youth, in particular, to embrace agriculture instead of the long-awaited search for non-existent white colour jobs.

“As a government, we are very much aware that agricultural activities, in general, includes fishing as well. More especially for those of us here in Korle Klottey in particular fishing has been our major employer since time immemorial.

As a result, we have never relented as an Assembly to lose concentration in enhancing the business of our fisher folks.”, he noted.

He said to maintain a healthy environment at the landing beach at all times, the Assembly had recruited labourers who undertake daily cleaning activities.

Other government interventions to support the enhancement of fishing included subsidized premix fuel supply, subsidized outboard motor package to fisher folks and other forms of incentives.

Mr Tawiah said the Assembly had also planned with the chief fisherman and other key stakeholders to set the fisher folks an appropriate fish market to make fishing profitable since there would be storage facilities provided to prevent the rush to sell at any hour to avoid post-harvest losses.

He noted that currently there were about 159 crop farmers with sizeable gardens within the Municipality, 24 poultry farmers, and 62 livestock farmers. Five markets, which do brisk businesses in terms of trading of agricultural products, foodstuffs, fish and meat on daily basis.

He congratulated all the award winners for the efforts put into their businesses to merit this historic recognition and urged all others playing similar roles to be encouraged to redouble their efforts.

He advised the unemployed youth to seek ventures in the area of agriculture because there were several assistance packages available in agric related business at the Assembly.

Mr Godfried Lomotey, Municipal Agric Director said Ghana since 1984, has been honouring its farmers and fisherfolks and this underscored the importance government attached to agriculture as a whole and how it holds its gallant farmers and fishermen in high esteem as key players in improving the economic development of the nation and consequently raising the living standards of the citizens in the country.

He said the theme for this year fitted into the Korle Klottey’s contest of agriculture, where due to pressure on the land, most farmers were small holdings and yet cannot afford to be peasants.

He said it was in this light that the government decided to enhance small scale agriculture making it more attractive to encourage the youth who shy away from agriculture due to the low-income earnings from it as compared to other sectors.

He appealed to policy makers and Chiefs, to take into consideration the role of urban agriculture in their planning schemes, saying, investment in agriculture was not a waste and called on the public and private sectors to invest in land as well as the other factors of production for a healthy and strong nation.

Mr Sowah Adjetey was adjudged the overall best farmer for Korle Klottey Municipal Assembly and took away a freezer, hook and line, 10 pieces of reflectors, GPS, and COVID-19 protective items.