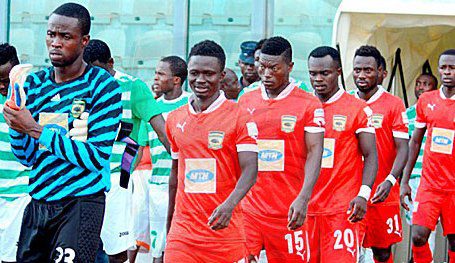 Kumasi Asante Kotoko’s title ambition suffered another setback at their own backyard on Sunday when Brekum Chelsea defeated them 1-0 at the Baba Yara Stadium in their match week 30 encounter.

The Porcupine Warriors who have been struggling to pick three maximum points at the Baba Yara Stadium since the commencement of the second round of the competition, displayed another shambolic performance to the displeasure of the home fans.

After failing to beat Aduana Stars on match week 28 despite dominating the entire 90 minutes,  it was the expectation of their fans to make amends against Brekum Chelsea to enhance their chances of winning the league, but the fans left the stadium completely dejected.

It was a match that the Kotoko fans were full of expectations, especially when Medeama had cut down their lead to six points after beating Accra Great Olympics on Saturday.

Brekum Chelsea started the match on a brighter note and missed a glorious opportunity to draw first blood under one minute when their striker failed to connect a beautiful cross from the right side of attack.

Kotoko swiftly turned defence into attack as Stephen Amankona came close to scoring but fell in the penalty box after a challenge on him and an appeal for a penalty was ignored by referee Abdul-Latif Adaari.

Few chances were created between the two teams after the early incursions until Christopher Nartey launched a ferocious strike from 25 yards, missing target narrowly in the 18th minute.

In the 30th minute the Porcupines were denied the opener by the goalkeeper of Brekum Chelsea, Gregory Obeng Sekyere who made double saves from the efforts of Franck Etouga Mbella.

Coach Christopher Ennin made two early substitutions in the 35th minute in an attempt to contain the home team who were probing for the first goal of the afternoon.

But for a brilliant save by Ibrahim Danlad, the visitors would have broken the deadlock on the stroke of the first half against the run of play.

Four minutes after the restart, goalkeeper Sekyere was called to duty when he saved a header by Mbella from close range.

Coach Prosper Nartey Ogum introduced Richmond Lamptey and Samuel Boateng for Stephen Amankona and Fabio Gama respectively in te 50th in search of an early goal in the second half.

The substitutions brought a lot of pressure on the visitors who resorted delay tactics to slow down the tempo of the game.

Kofi Owusu of Brekum Chelsea took an early shower in the 67th minute when referee Adaari showed him the exit after he punched the face of Christopher Nartey in an off-the-ball incident.

Kotoko took absolute control of the game and made several dangerous incursions into their opponent’s half but wasted the opportunities with Mbella being the worst culprit.

Despite Kotoko’s dominance and numerical advantage, it was the visitors who broke the deadlock in the 78th minute through Kelvin Obeng.

Obeng took advantage of a defensive blunder by Andrews Appau, raced into the vital area before placing the ball beyond the onrushing goalkeeper Danlad.

The situation forced Coach Ogum to bring on Evans Adomako and Solomon Sarfo Taylor in his quest to salvage a point for the league leaders, but Chelsea held on to secure a famous victory at the Baba Yara Stadium.