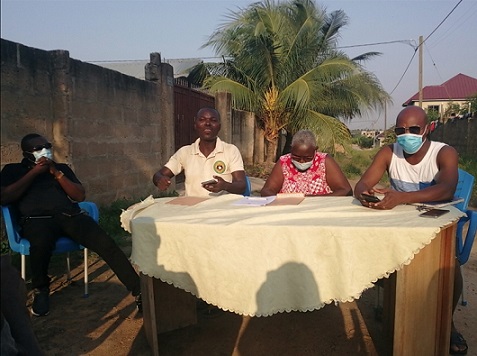 A group calling itself Kotoku Millennium City Landlords Association (KMCL) has appealed to the Greater Accra Regional Minister, Henry Quartey to urgently step in and holistically address the concerns of the onion sellers at Agbogbloshie Market who have been relocated to the Adjen Kotoku market near Amasaman in the Ga West Municipality.

This, they believe is the surest way to make his vision of “Let’s Make Accra Work” achievable.

The group at a meeting held last Sunday in Accra monitored by some journalists touted the directives by the Minister in the decongestion exercise dubbed “Let’s Make Accra Work” but raises some major concerns which they want his good office to amicably and urgently address.

“In as much as we wholeheartedly support this move, we the residents have concerns which we bring to your notice for urgent attention and action taken so the vision will be achieved with its full benefit”, the association’s petition partly reads.

The association’s requests captured in a 3-pages document to be addressed by the Greater Accra Regional Minister highlighted the issues of beefing up security by deploying more police officers in both the market and residential areas to ward of criminals in order to safeguard lives and properties, provision of good road network to ease transportation of goods and services into the market as well as provision of street lights to light up the area and establishment of proper waste management systems within the marketplace and its environs to ensure cleanliness among others.

Mr Sampson Gyasi Agyepong, Secretary of Kotoku Millennium City Landlords Association who briefed the meeting also lamented over the non-involvement of the group during decision-making processes.

“For us we’ve seen a lot of stakeholder meetings ongoing and we’ve realized that the residents in the area had not been engaged. We are part of stakeholders around, so for any decision to be made, for any implementation of policy to be made, we ought to be involved”.

He therefore calls on the authorities to always endeavor to engage them in all activities prior to decision making in the area so they can also contribute their quota to the development of the municipality.

While pledging the group’s support towards the achieving the vision of the Greater Accra Regional Minister, Mr. Agyepong applauded Minister for his hard work and launching of the new market initiative, adding, “a lot of ministers have tried to open the Adjen Kotoku market but it has not happened but due to the hard work and zealous nature of our regional Minister, Greater Accra is about working and we support him hundred percent”.

Reacting to the group’s petition, the Assemblyman of the area, Henry Marbel described the move as apt and worth adding that: “some of these things have already been discussed and they’re being worked on so your call would only go to enhance our request from the headquarters”.

The petition was signed by the group’s Chairman, Dr. Gabriel Kojo Frimpong with the support of its secretary, Sampson Gyasi Agyepong and addressed to the Greater Accra Regional Minister, Henry Quartey.

It was copied to the Member of Parliament of Amasaman, Akwasi Afrifa Mensah, the Municipal Chief Executive (MCE) Clement Wikinsin and Assemblyman for the area, Henry Marbel.

The meeting saw both the executives and members of the association in attendance. It was graced by the Assemblyman of the area, Mr Henry Marbel.

The news about the relocation of onion traders at Agbogbloshie to Adjen Kotoku Market has sparked a huge public outcry after the Greater Accra Regional Minister, Henry Quartey gave the instruction to move the traders.

The traders have since protested the directive saying the new place is too small and can’t accommodate all of them.

Some aggrieved persons, according to reports went on rampage and destroyed the office of the New Patriotic Party (NPP) and started burning tyres in the protest.

But reacting to the issue raised about the inconvenience nature of the market, Henry Marbel, the Assemblyman of the area explained that the inconvenience in the marketplace would always be a factor to reckon with considering the fact that the volume of trading and the movement of people that goes around but admitted that in all, it’s for the general good of the nation against the individual benefit.

“We shouldn’t wish that this market would be commissioned without any form of inconvenience, obviously the volume of trading that goes on at the Agbogbloshie market and we’re moving it up here then it would certainly come with some level of inconvenience.

The Kotoku Millennium City Landlords Association was formed with the vision of ensuring that the Greater Accra works. The association since its inception in 2018 has embarked on many projects within the Kotoku Millennium city area such as grading of inner residence access roads, installation of over 100 streets light through IGF and support from Amasaman MP, Afrifa Mensah, ensuring members get permits for their buildings, embarked on clean up exercises to rid the community of filth including collaboration with Assembly Member of the area, Henry Marbel and ECG for electrification project and meter acquisitions among others.

With a firm belief in unity and togetherness, the utmost desire of the Kotoku Millennium city Landlords Association is to see the Assembly open up the market for business activities to thrive in the community, hence the move to corroborate the efforts of the Greater Accra Regional Minister to achieve its vision.