The paramount chief of the Kpalime Traditional Area, Togbega Atikpladza Agbi Yao VIII, has appealed to government to help address the longstanding challenges in education, water, health, roads, infrastructure and unemployment in the area.

According to him, the failure of past and present governments to execute key projects in the Kpalime Traditional Area for decades is disappointing, to say the least. He was speaking at a grand durbar at Kpalime Duga to climax the celebration of Kpalikpakpa festival of the chiefs and people of the Kpalime Traditional Area in the South Dayi District of the Volta Region, on the theme ‘Accelerated Development through Peace and Unity’.

Togbega Atikpladza Agbi Yao VIII bemoaned several uncompleted school projects dotted around the traditional area which require the central government and district assembly’s intervention to have them completed to improve access to and quality of education within the area.

He said persistent appeals to the district assembly and central government to construct new school blocks for communities with deathtrap school buildings have not yielded any positive result.

He commended the government for the Free Senior High School policy, which has given children whose parents could hitherto not afford school fees the chance to now have access to secondary education.

Togbega Atikpladza Agbi Yao VIII appealed to government to expand and increase the capacity of Ghana Water Company Limited’s (GWCL) pumping station at Kpeve, and also extend pipelines all the way to Duga to supply potable water to all the communities along that stretch.

He noted that some of the health posts and CHPS compounds in communities in the traditional area lack adequate infrastructure and clinical personnel, thereby hindering effective health service delivery.

He, therefore, appealed to the government and the Ministry of Health to construct another hospital in the district, preferably in the Kpalime Traditional Area, to complement the Peki Government Hospital.

He explained that the 14.5 kilometre Todome-Toh road, one of the arteries under the Eastern Corridor Road project, has been abandoned for the past three years, and due to the dust, many residents in communities along the road are experiencing respiratory problems.

He urged government to send the contractor back to complete the road to facilitate smooth transportation and save suffering residents from respiratory problems
Appeal for ‘One District, One Factory’

Togbega Atikpladza Agbi Yao VIII appealed to the ‘One District, One Factory’ secretariat to situate a factory in the Kpalime Traditional Area as a means of creating economic growth that would accelerate the development of those areas and create jobs to help address the alarming unemployment situation.

The Kpalime Traditional Area is committed to using its annual Kpalikpakpa festival to conserve the environment in the wake of rapid degradation, largely due to inconsiderate human activity.

The festival was launched with ceremonial tree planting activities, with support from the Environmental Protection Agency. 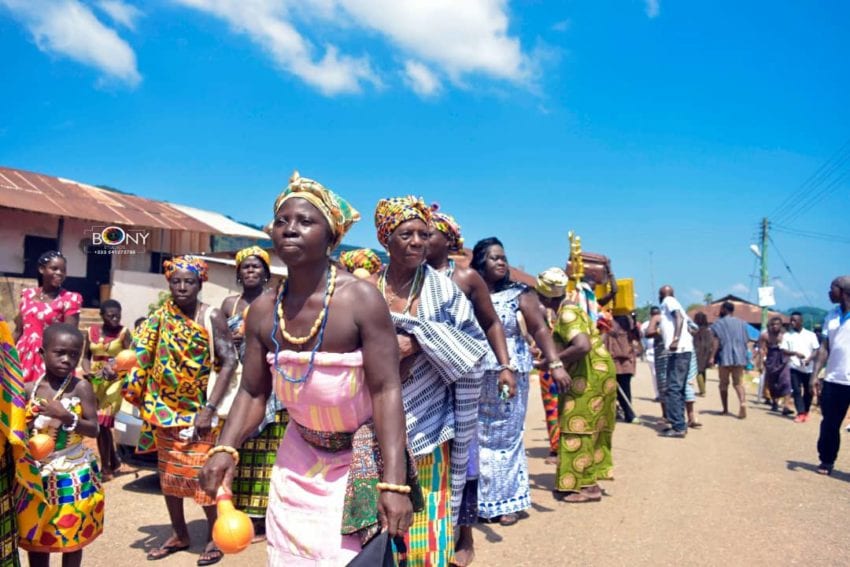 Over 200 trees were planted to, among others, serve as vegetation cover and wind breaks.

Togbega Atikpladza Agbi Yao VIII bemoaned the long-term destruction resulting from the indiscriminate felling of trees for commercial gains, and promised to work with stakeholders to restore the environment.

“I call on all to support the traditional area to plant more trees and clean up the environment to enable us have a better life”, he said.

The paramount chief called on the people to uphold peace, unity and discipline as tenets to help the area realise its developmental ambitions.

Mr John Pwamamg, acting Executive Director of the Environmental Protection Agency (EPA), who chaired the durbar, said a well-preserved environment was key to development, and that the agency would adopt Kpalime Duga as one of the areas it would work with in safeguarding the natural environment.

He said a waste segregation programme would be introduced in selected basic schools in the community, and hinted that the area would host the regional celebration of the World Environment Day next year.

Mr Rockson Dafeamekpor, Member of Parliament (MP) for South Dayi Constituency, said, “As we drum and dance, let the rhythms of the drums that present a uniform sound inform our communal progress, and our communal spirit must be rekindled.”

The MP said that his office had initiated tree planting activities in communities along the Volta River with the aim of checking erosion and providing the needed vegetation cover.

He said he was engaging the EPA, waste managers and the National Disaster Management Organisation to address challenges arising from rising river levels, which often flooded homes and submerged farms.

Mr Patrick Mallet, District Chief Executive for South Dayi, said there was a lot the area could benefit from government’s flagship programmes, adding that the assembly was aware of the challenges facing the area, and was working to have them addressed.

This year’s celebration is the 23rd since the festival was instituted, and it is the first since Togbega Atikpladza Agbi Yao VIII ascended the throne.

The durbar was attended by chiefs and people from neighbouring communities, as well as dance and cultural troupes, who kept the event in colour.

A fundraiser was held at the event towards the construction of a proposed chief’s palace.

Kpalikpakpa is celebrated annually to memorialise the historical achievements of the people of Kpalime and to reawaken the ancestral spirit of unity, which helped the seven towns in migrating to their present location.

It is also held to help rally the people towards the development of the area.