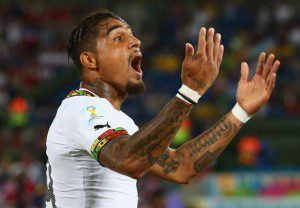 Germany-based midfielder Kevin-Prince Boateng says he will not play for Ghana again in future unless he has been approached or begged to change his mind.

The Schalke player?s international career with the Black Stars looked to have ended after he was booted out of the World Cup last month for verbally abusing coach Kwesi Appiah.

Boateng, who was not at his playing best at the World Cup, played a bit part role in the Black Stars early exit from the tournament in Brazil.

The midfielder quit the Black Stars few months after playing at the 2010 World Cup that helped him to land a bumper move to AC Milan.

The Ghana FA and other government authorities travelled to Germany to beg him to play for the Black Stars ahead of the World Cup in Brazil.

Boateng expects a similar approach he is to change his mind whether to play for the Black Stars or not.

?The coach has said that he no longer plans with me in mind. Therefore the subject about (the Ghana team) is done,? Boateng told the German media.

?I will reconsider the subject, if someone approaches me.?

With the 2015 Africa Cup of Nations approaching, Ghana will need its best players to play in qualifiers and the tournament in Morocco in January.

Do you think Kevin should return for Ghana? Do you think we should beg him again to play for Ghana? Would he respect the coaches? Would he play with full commitment? Make your views known in the box below: