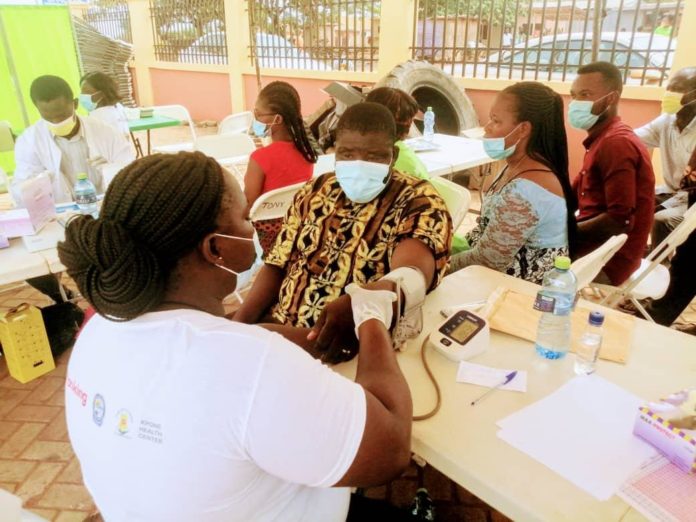 Over 300 residents including farmers in the Kpone-Katamanso Municipality have been screened for HIV/AIDS.

The free health screening and HIV/AIDS sensitization programme were organised by the Kpone-Katamanso Municipal Assembly (KKMA) in collaboration with the Ghana AIDS Commission (GAC) on the theme, “Know your status and let help stop the spread of HIV and AIDS now”.

Speaking to the Ghana News Agency, Mrs. Gertrude Abebleh, Kpone-Katamanso Focal Person for the GAC, said it was time Ghanaians paid critical attention to the spread of the Human Immunodeficiency Virus (HIV).

Mrs Abebleh added that, due to the laborious works of the farmers, many of them did not have the luxury of time to undergo health screening to know their status, saying that, the virus was fast spreading in communities therefore the need for all stakeholders to curb it.

She said available records showed that people were contracting HIV in communities such as Sebrepor, and Kpone where the infection rate was high.

According to her, participants in the screening received female, and male condoms as well as informational materials which was aimed at reducing the spread of the virus.

She said the yellow fever mass immunization would target people aged from 10 to 60 years to protect them from contracting the infection.

She noted that research has it that over 85 per cent of infected persons did not show any sign and could be fatal when not attended to.

Mrs Gyebi added that the immunization would take place at designated centres including health facilities within the Municipality with the observance of all COVID-19 health protocols.