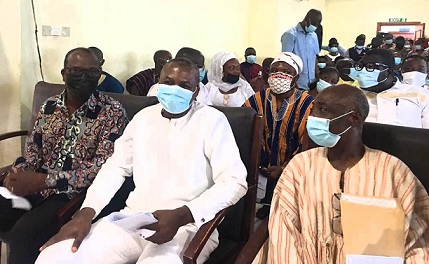 The Assembly Members of Kpone-Katamanso Municipal Assembly have given Mr Samuel Okoe Amanquah, the President’s nominee for the Municipal Chief Executive (MCE) position, a 100 percent endorsement.

All the 27 members, including government appointees, voted “Yes” to confirm the nominee in an election supervised by the Electoral Commission (EC).

The Local Government laws, mandate that a Nominee gets two-thirds majority votes of the Assembly Members to stand elected.

Mr Amanquah will take over the realms of power in the area from the outgoing MCE, Mr Solomon Tettey Appiah.

Mr Henry Quartey, the Greater Accra Regional Minister, congratulated Mr Amanquah for his appointment and commended the Assembly members for the unity they demonstrated by giving the nominee 100 per cent endorsement.

He charged the MCE not to play politics when sharing developmental projects for the Assembly members in the Municipality and called Assembly Members to bury their differences and unite for the development of Kpone.

Mr. Joseph Akuerteh, Member of Parliament for the Kpone-Katamanso Constituency, pledged to support the MCE for development to take place in the Municipality.

“It is said that after politics development should be the results, I therefore congratulate Mr Amanquah and I have no other option than to support him,” he added.

Mr Amanquah in his acceptance speech, expressed appreciation to President Nana Addo Dankwa Akufo-Addo for his nomination and thanked the Assembly Members also for his confirmation.

He said the development of the Municipality would be a priority and pleaded with the Assembly Members to join forces to help build the image of Kpone Katamanso Municipality.

He called on the residents and all stakeholders to support him initiate development to thrive in Kpone.

A brief profile of Mr Amanquah popularly known as OKOSON, indicates that he has been a member the New Patriotic Party since 1994 and was contested Election 2008 as the party’s Kpone-Katamanso Constituency Parliamentary Candidate.

Mr Amanquah 53-year-old is married with four children served as the Deputy Campaign Manager for the Party’s Constituency campaign in Election 2020.

He proceeded to Emit Commercial Institution for his GEC ‘O’ Level after which he pursued his GCE ‘A’ Level certificate and HND from the Accra Polytechnic now Accra Technical University.

Mr Amanquah also holds a Bachelor of Science in Business Administration degree from the Kwame Nkrumah University of Science and Technology (KNUST) and an MBA in Finance from the Coventry University, UK.

Until his nomination, he was the Head of Accounts for the Tema Chapter’s Teachers’ Network Co-operative Credit Union (TCTNCCU).

The Kpone-Katamanso Municipal is located at the Eastern part of the Greater Accra Region and stretches from the coast to the southern lower slopes of the Akuapim mountains.

The Municipality shares its boundary to the Southern Belt with Ningo-Pampram District on the South-East and Tema Metropolitan Assembly on the South-West and the south by the Gulf-of-Guinea.

On the Northern Belt, its boundaries are shared with Shai-Osudoku District on the North-East and La-Nkwantanang-Madina Municipal on the North-West and on the North by Akwapim South District.

The Kpone-Katamanso Municipal Assembly is only 38 kilometers drive from Accra, the capital city of Ghana.

Kpone-Katamanso Municipal Assembly was carved from the Tema Metropolitan Assembly in 2012 with the promulgation of the Legislative instrument (L.I.) 2031.

The Assembly has a membership of 29 made up of 18 elected Assembly members and eleven Government appointees.

Send your news stories to [email protected]l.com and via WhatsApp on +233 244244807 Follow News Ghana on Google News