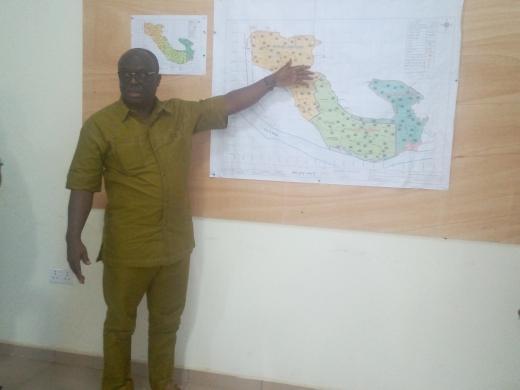 Ghana’s quest to be self-reliant in food production will receive a major boost with the completion of the 2000-hectare Kpong Left Bank Irrigation Project (PLBIP) by the end of the year.

The PLBIP, being implemented under the Ghana Commercial Agriculture Project (GCAP) of the Ministry of Food and Agriculture, (MoFA) would enable more than 1000 large and smallholder farmers to also crop rice maize and vegetables.

Mr Osei Owusu-Agyemang, the Project Coordinator of GCAP, told the Ghana News Agency that the project was about 65 per cent complete.

Some of the major works done include the construction of canals, installation of substructures and automation equipment.

The project, awarded in 2018, involves redesigning and construction of the scheme in a modernised way to make it possible to control how much water is released to the farmers who are expected to pay for the service to ensure sustainability.

With the digitisation, the project scheme managers would be able to monitor the level of water in the supply canals and the quantity of water that farmers use for irrigation so that they could be charged the appropriate amount of fees instead of basing it on the size of their farms.

Some farmers had already set up nursery beds to raise seedlings for transplanting, Mr Owusu-Agyemang said.

“This is a major season for irrigation schemes and so farmers have started cropping,” he said. “This is a piece of good news because this project is promising and farmers will work hard to justify the investment,” he said.

When asked about marketing, he said there was a comprehensive value chain strategy that would link farmers to markets.

The farmers would also be trained to employ best agronomic practices and be connected to more markets to increase productivity and generate more profit.

Mr Owusu-Agyemang stated that GCAP was also undertaking some rehabilitation works at the irrigation facility at the right bank.

Mr Richard Collins Arku, the District Chief Executive of North Tongu District of the Volta Region, stated that the project would improve the farming activities of thousands of residents in the 21 communities whose major activities were farming.

The rain-fed agriculture, he said, would soon give way to year-round farming.

Additionally, farmers would cease to trek long distances to the farm due to the close proximity of the project.

“Once there is more work that will put money in the pocket and food on the table, the youth will also be discouraged from migrating to the cities,” he added.

“Already 84 hectares have been handed over to us. We have registered all of them and started the allocation of the land. For a start, each farmer has been given an acre to farm”.

The government has said the country’s annual rice import bill is a whopping one billion dollars and is determined to achieve sufficiency and produce surplus exports to neighbouring countries in three years.