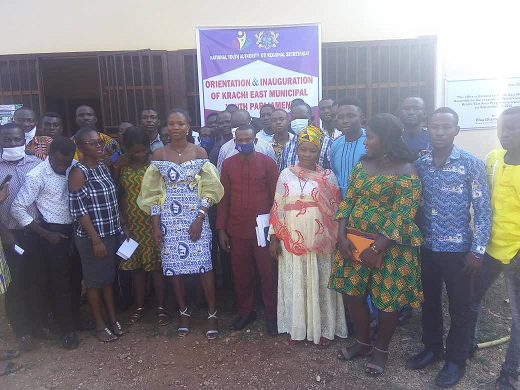 Krachi East Municipal Assembly has inaugurated a youth Parliament, a non-partisan platform designed for young men and women to contribute to the decision-making process at the Assembly level for the country’s development.

The youth parliamentarians were drawn from the various youth groups within the Krachi East Constituency and were all sworn into office to serve a maximum of 12 months term of office.

The youth parliament, a miniature of the National Assembly, were taken through orientation and subsequent inauguration at Dambai.

Mr Yao Semorde, National Youth Authority Director for both Volta and Oti Regions, challenged the youth parliamentarians in Municipality to work hard by bringing up ideas to promote problems, which could minimise situations in the communities.

Addressing the house, he urged them to be studious and challenge themselves above the ordinary to champion sustainable national development.

Mr Daniel Bamease, Speaker of the youth parliament assured the public that they will never make an offer to participate in any form of violence.

Mr Bamease expected a cordial working relationship between the youth parliamentarians and Municipal Assembly for the needed development of the area.

Mr Mokanja Yaw, Acting Municipal Coordination Director, who graced the occasion expressed his optimism in the youth of the Municipality and called on them to take advantage of the many government policies and programmes initiated to better their lot.