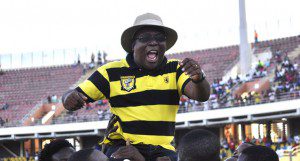 Ashantigold chief Kudjoe Fianoo fears the delay start of Ghana’s top-flight could affect his side’s chances in the CAF Champions League next year.

The Ghanaian top-flight has been rocked by legal tussle between clubs seeking promotion to the elite division.

Tema Youth are challenging the promotion of Dreams FC at the Court of Arbitration for Sports while Techiman City’s qualification appears to be hanging over bribery claims.

The delay start of the league has hit the pockets of club owners amid a serious economic crisis crippling the West African nation.

And Ashantigold chief Kudjoe Fianoo is worried the delay start of the league could ruin his team’s chances of making an impact in Africa’s elite inter-club competition next year.

“The league delay is a worry to all of us. We are starting Africa campaign in February and so it’s not funny anymore,” he said

“We have to do something drastic to ensure we start immediately.

“We need to get our rhythm, build cohesion and all the other ingredient needed to execute a successful campaign.

“At the moment we have to look at plan-B to see what can be done.”

The miners are expected to travel to Tanzania for a four-club tournament in January next year.