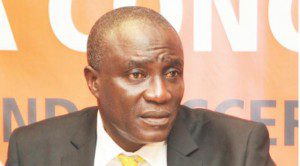 Aspiring Chairman of the Ghana League Clubs Association [GHALCA] Kudjo Fianoo has slammed the current executives of the association for being inexperienced and sinking the image of the body.

Fianoo says the association has lost its credibility hence his decision to contest for the chairmanship position.

Over the week, reports have been rife that the former administrative manager of the body will be contesting for the chairmanship position in the election expected to come off March 2016.

GHALCA under the chairmanship of Alhaji Raji has come under severe criticism regarding the way the body is been run.

And according to Kudjo Fianoo, the body has lost its goal stating the current executive members are inexperienced.

He added that at the time of forming GHALCA, none of the current executives was around so they lack the knowledge of the objectives behind the formation of association.

He added that the only experienced person who is with the current executives is George Amoako but those days when they were forming the body he was directly not involved.

“GHALCA has lost it’s goal and credibility. Most of the current executives do not even know the objectives of GHALCA. The image of the association has been dented and i think we need to rise and revanp it, Fianoo said on Boss FM in Kumasi.

PAC orders Joseph Akulu to surrender to Police over misappropriation