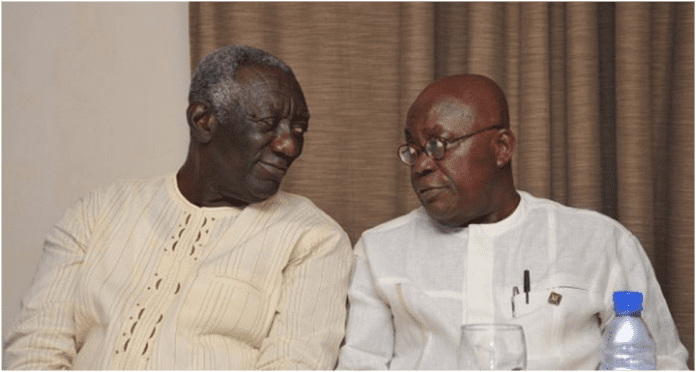 According to sources close to the tagged anti-Akufo-Addo elements, the former Presidents presence at the Sunyani conference of the NPP smacks of “betrayal” of persons being hounded out of the biggest opposition party because of perceptions that they are his loyalists. Intelligence reports picked by this paper ahead of last week NPP extraordinary conference in Sunyani indicate that Mr Kufuor, who only days ago returned from an overseas trip to observe his late brothers one week funeral rites, had told some of his confidants he was not going to grace the occasion in protest of the maltreatment of some NPP kingpins believed to be his loyalists by Nana Akufo-Addo and his aficionados.

“We all know he was not going to be there…but before we could say Jack, the old man (Mr Kufuor) was in Sunyani and even made certain statements in support Nana Akufo-Addo who has employed anti-democratic tactics to kick out Afoko, Kwabena Agyapong and Sammy Crabbe. All these people, including Kwadwo Mpiani, Dr Arthur Kennedy, Dr Nyaho Tamakloe, Dr Richard Anane, Nana Ohene Ntow and others are going through these painful treatments in the party because of Kufuor and Alan,” an aggrieved NPP supporter told this paper.

While some of his admirers think it was wrong for him to have attended a conference organized by ‘enemies’ of his alleged loyalists, General Secretary of the ruling National Democratic Congress, John AsieduNketsia says, the former president had no choice than to grace the event.

According to Asiedu Nketsia,Mr Kufuor attended the NPP program and made the demeaning statements against President John Draman iMahama’s administration to avoid being suspended by Nana Akufo-Addo and his gang.

“Kufuor spoke against Mahama’s administration to escape suspension. Fear has gripped Kufuor and he spoke under duress because all those associated with him have been suspended”,Asiedu Nketia stated.

However, the aggrieved pro-Kufuor supporters believe the former President ought not to have showed up at the conference “when he has told us that he will not be there in protest of how some of our big men are being treated.”

The peeved pro-Kufuor supporters also branded failed flag bearer aspirant, Alan Kwadwo Kyeremanten a traitor “who has failed to stick to principles of fighting injustice and illegalities in the party. He (Alan) is following Nana hoping that after Nana Akufo-Addo, NPP will cede the flag bearer post to him. Even if it is not true that these people are doing your bidding, does he (Alan) have to treat them like that, especially when Nana Addo and his people have openly tagged them pro-Alan/Kufuor and therefore cannot work with them?”