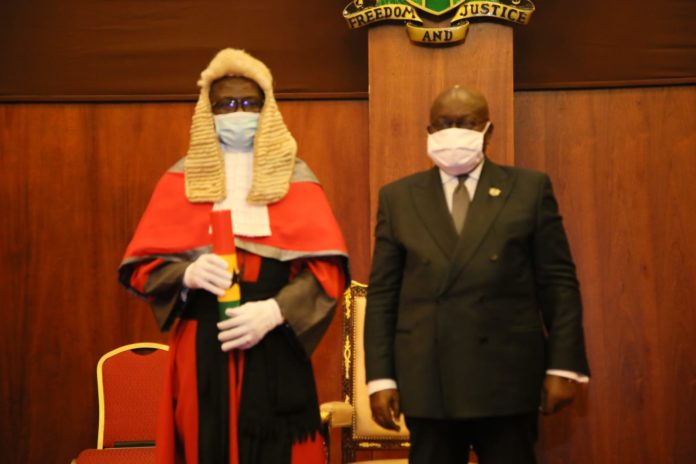 President Nana Addo Dankwa Akufo-Addo Tuesday swore in Justice Emmanuel Yonny Kulendi, a renown private legal practitioner to the Supreme court, charging him to guard the independence of the Judiciary at all times.

Speaking at the Swearing-in ceremony at the Jubilee House, Accra, President Akufo-Addo congratulated Justice Kulendi on his appointment to the apex court, which he said was well-deserved because he had

met the stringent requirements of the constitution to hold that office.

The President told Justice Kulendi that his elevation to the highest court of the land was a particularly poignant experience for him because he (Kulendi) had his early advocate training under his pupillage.

“I was your pupil master in your early days at the Bar, and you cut your teeth in legal practice in my Chambers, Akufo-Addo, Prempeh & Co., before branching out to establish your own successful practice, [email protected], which has become a respected voice in the legal fraternity of our country.

“Your elevation, understandably, fills me with considerable pride,” he said, optimistic that Justice Kulendi’s elevation to the Bench would help enrich the evolution of the country’s jurisprudence.

President Akufo-Addo admonished Justice Kulendi to guard jealously the independence of the Judiciary, because the Ghanaian constitution, anchored on the doctrine of the separation of powers, has conferred final judicial power exclusively on an independent judiciary.

He noted over the last 27 years of the Fourth Republic, the Ghanaian people had demonstrated their determination to build a nation of accountable democratic governance founded on the rule of law with the Judiciary tasked with an important responsibility to protect the rights of individual liberties and fundamental human rights of citizens.

The President noted that the broad and liberal spirit of the Constitution should inform the different perspectives that appointments to the Court should reflect.

That is why, as Attorney General, from 2001 to 2003, in the Government of the second President of the 4th Republic, John Agyekum Kufuor, he proposed for nomination and appointment onto the Court, distinguished academic jurists of varying viewpoints, such as Professor Samuel Kofi Date-Bah, the late Professor Tawia Modibo Ocran, and the late Professor A.K.P Kludze, three persons who were not in the mainstream, but whose works turned out to have such significant impact on the growth of the Court’s constitutional jurisprudence.

“As President, I have continued in this tradition, by appointing, inter alios, the immediate past President of the Ghana Bar Association, Justice Nene Amegatcher, and the former Dean of the Faculty of Law, University of Ghana, Justice Professor Emmanuel Nii Ashie Kotey, again persons who were not in the mainstream, as members of the Supreme Court,” he said.

Mr Kulendi on his part thanked the President for the confidence reposed in him, and pledged to discharge his duties with dignity and independence of thought.

“Needless to say, I will courageously and strictly adhere to the terms and the oaths that I have subscribed to,” he added.