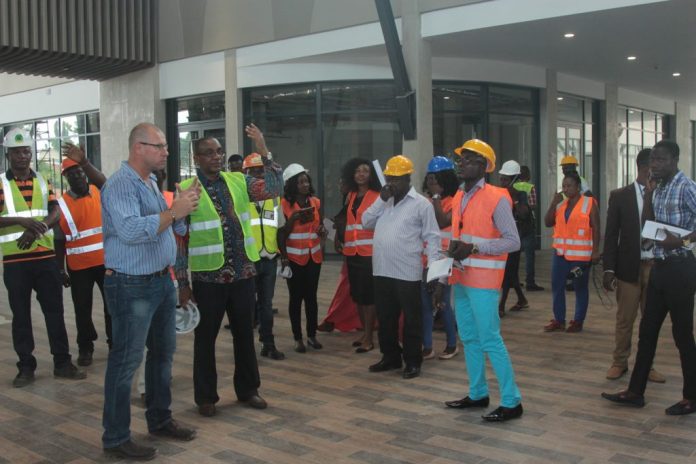 The countdown for the much-awaited opening of Kumasi’s first modern shopping mall – the Kumasi City Mall – began on Thursday, with a facility tour for Kumasi-based media practitioners, and a call on the people of Kumasi to take full advantage of opportunities brought by an A-grade retail shopping facility.

Over a hundred journalists and practitioners from the electronic and print media in Kumasi, were conducted around the sprawling edifice of the shopping mall, and briefed about how it will operate when it finally opens to the public on the morning of Thursday, April 20, 2017. 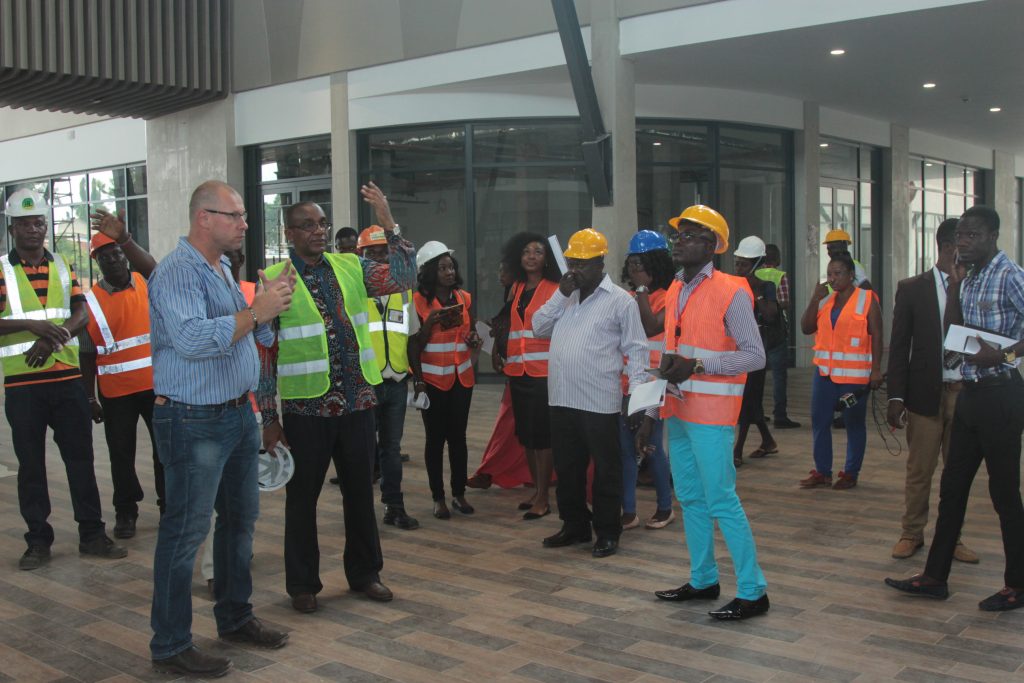 Mr. Gerber explains a point to Mr. Kofi Sekyere during the facility visit of the Kumasi media

The Asantehene, Otumfuo Osei Tutu II, who originally cut the sod for the commencement of the project on June 6, 2014, will subsequently perform the formal commissioning of the US$ 95 million KCM on May 10, 2017.

Kumasi’s first modern shopping mall is located at Asokwa, on the confluence of Lake Road, Yaa Asantewa Road and Hudson Street, and sits on a total land area of 15.4 acres with a letable space of 18,500 square metres, and potential for further expansion of up to 10,000 square metres.

Mr. Kofi Sekyere, Chairman of the Board of Kumasi City Mall, told the journalists that the developer, Delico Property Investments Ghana Limited, is assiduously pursuing an agenda of setting an entirely new standard in comparative one-stop destination shopping in Ghana, and said that in the span of just four years, the company’s footprints are boldly visible. Mr. Gerber explains a point about the architecture to journalists as Chairman Kofi Sekyere looks on during the facility tour by Kumasi media practitioners

Aside of the obvious benefits such as the generation of employment for thousands in the metropolis, the residents of Kumasi and its wider catchment area can now access both their basic necessities, as well as luxuries, from underneath one roof – a convenience factor which has eluded this great city for ages.

KCM also provides the bubbly Ashanti regional capital with a modern location for business transactions, social interactions and entertainment. Then over time, as far as food is concerned, the mall will provide a ready market access for fresh produce and help improve local farming techniques and quality control.

Apart from the convenience which a world class mall introduces into the shopping life of the people of Kumasi, Mr. Sekyere said he was particularly excited about the potential impact of the multi-million dollar investment on Kumasi’s local economy, lifestyle and business in general. 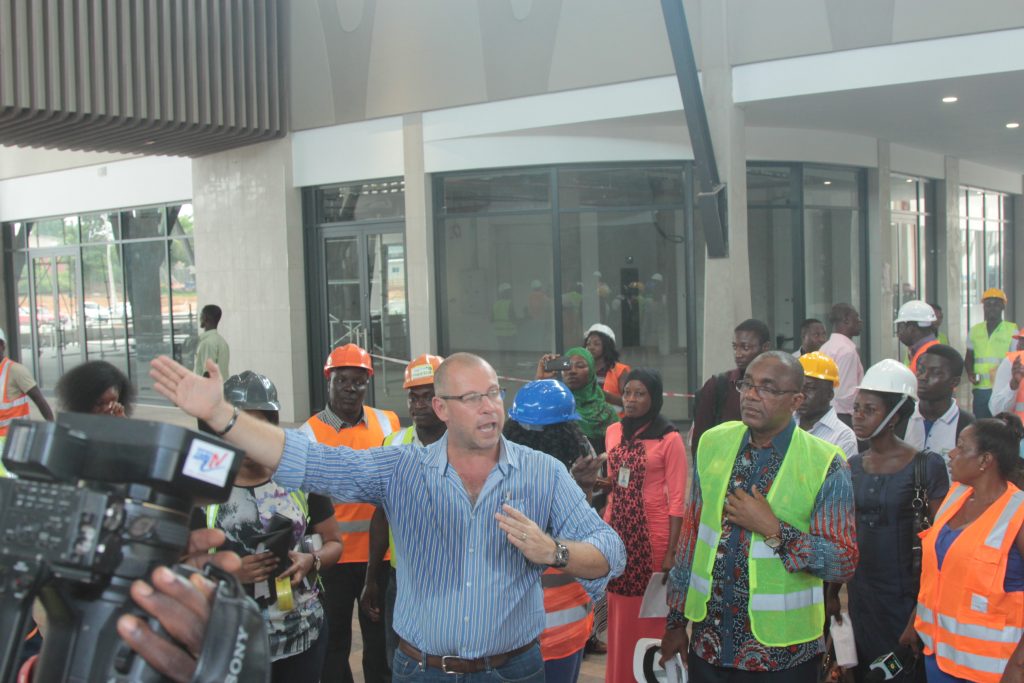 Mr. Gerber explains a point about the architecture to journalists as Chairman Kofi Sekyere looks on during the facility tour of the Kumasi Press Corps

“Both the construction and trading stages of this project have generated considerable employment avenues for the youth in Kumasi. What is most desirable now is for the local business community to position itself strategically enough to take full advantage of the myriad of opportunities brought by the Mall,” Mr. Sekyere said.

Mr. Roux Gerber, Development Manager for the project who conducted the journalists around, said apart from the Mall’s balanced tenant mix, unique design principles were incorporated in the architecture and its aesthetic designs to give the facility an ability to deliver on the aspirations, lifestyle and social demands of the average Kumasi shopper and patron.

“Of all the malls in Ghana, KCM is unique in many ways and one of its rare qualities is that, it does not only have a massive parking, it has the biggest basement parking in Ghana,” disclosed Mr. Gerber.

Kumasi city Mall is enclosed at the two extreme ends which house the two main anchor tenants – retail giants Shoprite and Game – but has a semi-enclosed midsection where the food court is located.

The construction phase of the project gave direct employment to nearly 1,000 Ghanaians and engaged mostly Ghanaian sub-contractors who used local artisans, builders, steel workers and wood workers. Besides the mall management staff, no less than 600 workers, mostly from neighbouring communities in Kumasi, are expected to be employed by the various tenants who will operate in the Mall.

KCM is a semi-closed shopping facility, which, according to the developer, has been specially designed to reflect the local environment and lifestyle in Kumasi, adopting highly innovative and cutting-edge technology in real estate development in the construction process. Notably, the edifice’s columns and ceilings are intricately designed to portray and present an artistic view of the trees and forest elements which characterize greenery the Ashanti Region. 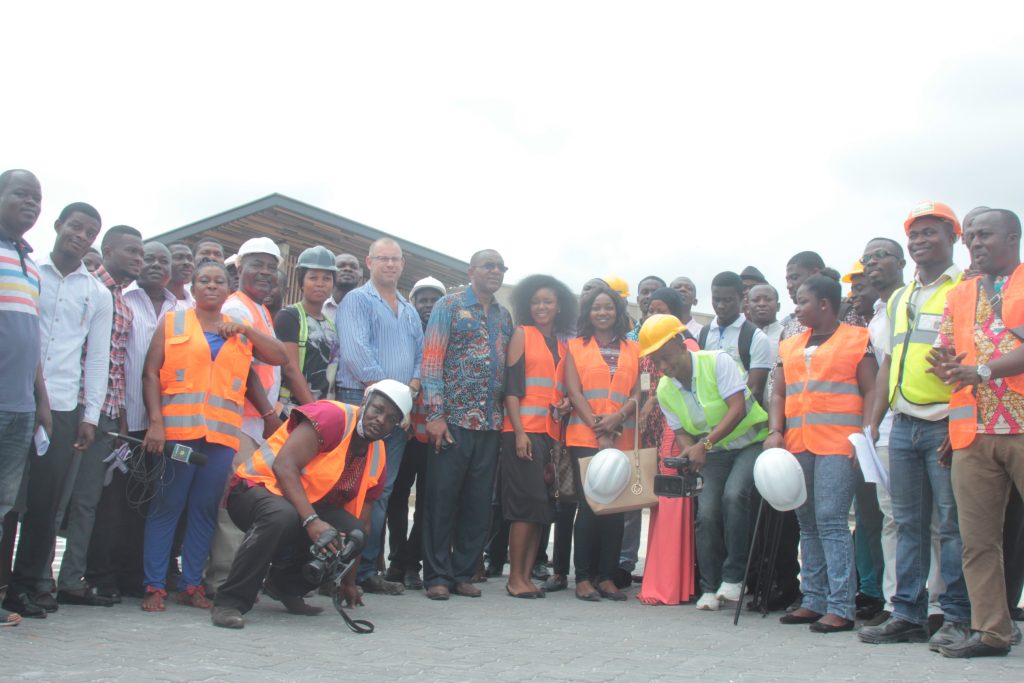 With a total car parking capacity of over 1,000 bays on-grade as well as undercover basement, Kumasi City Mall is anchored by two well known retail operators in Ghana, namely Shoprite and Game and has 60 line shops offering a variety of goods and services in various retail categories, including grocery and foodstuffs, lifestyle, beauty and wellness, electronics and telecommunications, budget and designer fashion and clothing.

The mall is a development owned by Delico Kumasi Limited, a fully owned subsidiary of Delico Property Investments Ghana Limited, the same group which owns the Achimota Retail Centre and is the majority shareholder of West Hills Mall.

Delico Property Investments Ghana Limited is a wholly owned subsidiary of Delico Property Developments Limited, Mauritius – a joint venture between AttAfrica Limited, Mauritius and Nasek Investments Limited (Nasek), a Ghanaian controlled entity in Mauritius. AttAfrica is the majority shareholder in Accra Mall and is a leading retail property investor in Africa with investments in Zambia and Mozambique and its shareholders own several shopping malls across South Africa. Nasek’s affiliated company in Ghana, Sandpark Properties Limited, is developing a luxury gated residential complex a few meters away from West Hills Mall and is also the Development Manager of the construction of Ecobank’s Head office at Ridge, Accra.