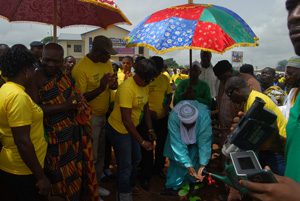 A dignitary planting a tree during the launch of the project

KUMASI MAYOR, Kojo Bonsu, has reiterated the need for children to be imbibed with the need to preserving the environment as they grow.

Speaking at a public function, he admonished parents, guardians and teachers to educate their children on how to make the environment green and beautiful at all times.

He was speaking at the Kumasi Urban Forestry Project dubbed ?Me and My Tree Competition? which was officially launched at the forecourt of the Asokwa Police Station on Wednesday.

As part of the project, Kojo Bonsu said the KMA ?is targeting to plant about one million trees alongside highways, open spaces and school compounds across Kumasi, by 2017.?

The ambitious project, the Kumasi Mayor remarked, is geared towards restoring Kumasi back to its past ?Garden City? status, entreating the public to support the project to succeed.

He said school children would play an integral role to help make the project a success.

Kojo Bonsu announced that there would be a tree planting competition among school children dubbed ?Me and My Tree Competition? and winners of the competition would be handsomely rewarded.

The Kumasi Mayor announced that about 200 trees have been planted at some parts of Kumasi as part of the massive tree planting project, indicating that the project would help beautify Kumasi.

Bodies such as Department of Parks and Gardens, FORIG, GES and the Kwame Nkrumah University of Science and Technology (KNUST) are all playing roles to make the project a success.

The historic event was graced by traditional leaders, government officials, police personnel, school children and people from all walks of life.

Some selected people planted some trees to officially start the project.

The Ashanti Regional Minister, Samuel Sarpong, lauded the KMA for the brave and insightful initiative, noting that trees could help check erosion, make the environment green among other benefits.