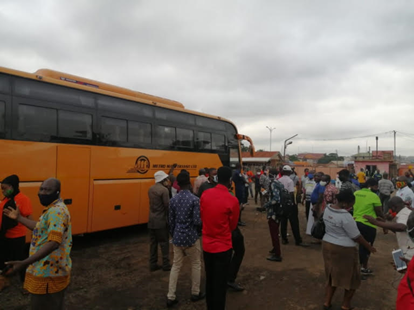 The Kumasi terminal of the Metro Mass Transit remains locked on Thursday with heavily armed security personnel patrolling the area.

The terminal was temporarily closed down on Wednesday, following a demonstration by the junior staff of the company demanding the payment of their salaries.

When the Ghana News Agency visited the terminal on Thursday morning
The buses were packed in the yard with scores of passengers travelling to various destinations stranded.

The GNA gathered that Mr John Osei, the Chairman of the junior staff union, was interdicted by the management following the demonstration on Wednesday.

The over 250 workers embarked on a series of demonstrations in recent weeks to demand payment of their salaries, which was in arrears for last three months.

Despite management assurances to pay the salaries, the workers were still not paid.

Some of the aggrieved workers told the GNA that the interdiction of their chairman was going to worsen the already volatile situation.

According to them, the use of threat and intimidation would not help resolve the problem.

Some of the passengers who spoke to the GNA expressed worry about the turn of events and called on the management to find an amicable solution to the stand-off.