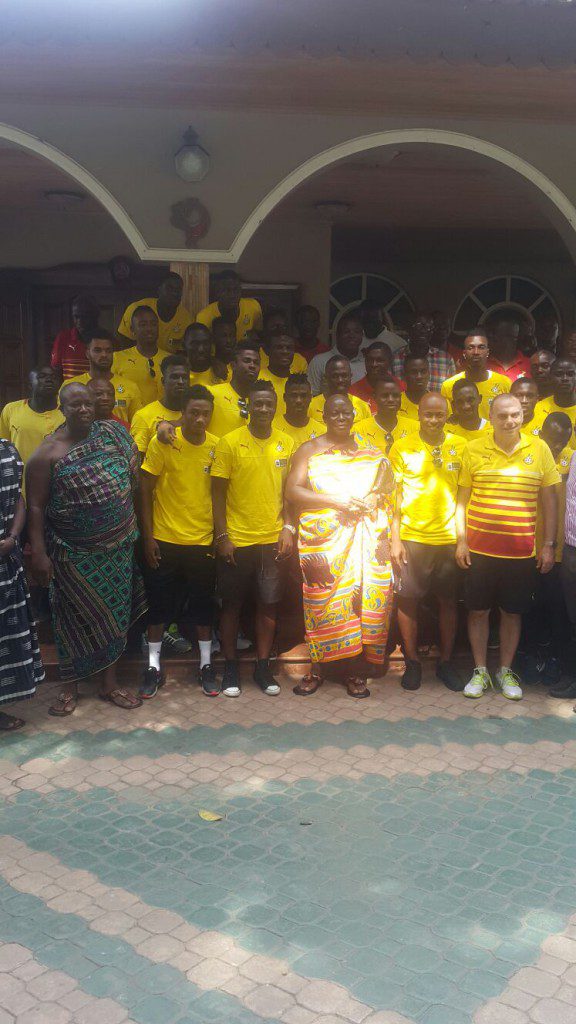 Ghana players and the Asantehene at Manhyia on Sunday afternoon

His Royal Majesty, the Asantehene Osei Tutu II, has ordered radio stations in Kumasi to whip support for the Black Stars and called on supporters to troop the Kumasi Sports Stadium to support Ghana in thesecond-leg clash with Comoros in the 2018 World Cup qualifier.

The King of the Ashantis made this call when they Black Stars paid a courtesy visit to his palace on Sunday afternoon after arriving in the Garden City for Tuesday’s match.

The Asantehene ordered one of Kumasi’s strong football analysts Ali Maradona to make the calls to the radio station apparently in response to concerns that a radio station has embarked on a call to get supporters not to attend the game.

The Black Stars are returning to Kumasi after they were booed out of the Stadium last year after the 2015 Africa Cup of Nations qualifier against Uganda after weeks of campaign against the team.

The Asantehene says Ali Maradona must ask the public and the radio stations to support the Black Stars during Tuesday’s match.

“Ali Maradona I am asking you to visit the radio stations from today and ask the public to go to the stadium to support the Black Stars during Tuesday’s match,” the Asantehene said during Sunday’s meeting with the players.

TheBlack Stars host Comoros on Tuesday at the Baba Yara Sports Stadium after drawing goalless on Friday in the first-leg in Moroni.