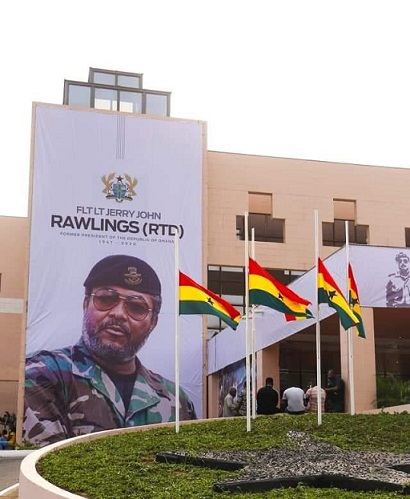 Some residents in Kumasi have expressed deep sadness as the late former President Jerry John Rawlings was laid to rest at the Military Cemetery today, in Accra.

They said late President Rawlings had fully paid his dues to the development of Ghana, and his good legacy would remain in the country’s political history forever.

According to them, former President Rawlings demonstrated selflessness, integrity and charisma during his reign as Head of State which ensured that the country’s socio-economic and political growth were achieved.

They told the Ghana News Agency, during spot interviews across some streets in Kumasi on the final funeral rites of the first President of the Fourth Republic that a great tree had fallen and Ghana had lost a great personality.

A retired teacher, Mr Michael Kusi Prempeh, said President Rawlings did everything possible to bridge the socio-economic gap between the poor and the rich.

He said the youth, who did not experience the era of military rule, should appreciate late former President Rawlings for being the reason Ghana is enjoying peace.

He said his death came to him as a shock when the news broke out.

“Late President Rawlings’ death was a shock news for me, he was a great man who offered more to the country, but his death has denied the country from benefiting from his great experience,” he said.

Mr Kusi Prempeh said Ghana needed people of his calibre to move the democratic principles of probity and accountability forward.

A 70-year old woman, Madam Grace Anima, told the Ghana News Agency that former President Rawlings was a great man who she admired so much for his principles on corruption, greed and selfishness on the part of some Ghanaians.

She added that she was saddened to hear the passing of Rawlings.

Madam Anima said Rawlings was a legend in Ghana’s political history since he paved the way for the Fourth Republican Constitution of Ghana, with his desire to ensure probity and accountability in all spheres of socio-political life of Ghanaians.

She encouraged the youth to emulate the outstanding and good attributes of Rawlings to help them achieve great excellence in all their activities.

She said he was a man who spoke truth to the nation when he was the President of Ghana.

“Former President Rawlings was indeed a great man who led the nation well. I respected him for how he spoke the truth when he was the leader of the country, May his soul rest in Peace,” Madam Anima said.