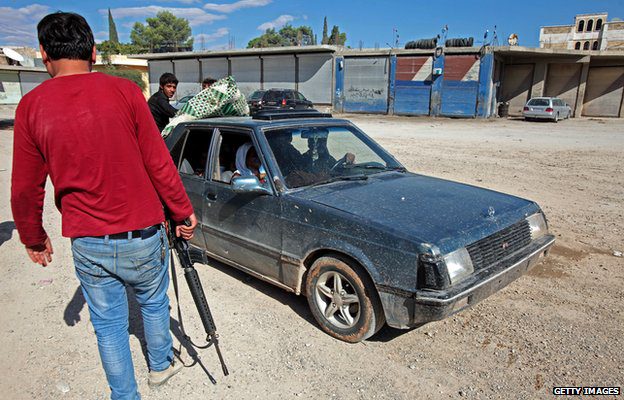 Kurdish forces defending a besieged Syrian enclave of Kobane from the Islamic State jihadist group Monday said they were prepared for street fighting inside their last stronghold. A senior local official called for a US-led coalition against the extremists to step up air raids on the heavily armed forces attacking Kobane, located on Syria’s border with Turkey.

“On the ground we are able to carry on the fight bravely, but we need the allied forces to help us by striking terrorist bases which have heavy weaponry,” Anwar Muslim, prime minister of the self-declared Kurdish Kobane autonomous canton, told dpa.

“Our fighters as you know have been preparing for the big battle and the street fighting,” he added.

A monitoring group said that at least 19 Kurdish fighters and 29 jihadists were killed in overnight fighting around Kobane, which is also known as Ain al-Arab.

“Last night the Islamic State fighters reached 200 meters from the houses of Kobane from the south-eastern side, but due to the fierce battles they faced by the Kurdish fighters they were forced to retreat further away about 500 meters,” Rami Abdel-Rahman, director of the Britain-based Syrian Observatory for Human Rights, said.

The jihadists had advanced on Kobane from the south-east after capturing the strategic Mishte Nur hill overlooking the town, but were repelled after fierce clashes, Muslim said.

The Observatory reported a loud explosion overnight, but was not able to confirm whether it resulted from an air raid by the US-led coalition against the Islamic State.

Kurdish news site Welati had reported seven coalition air strikes on Islamic State positions around the front line on Saturday night, but the area was not mentioned in US military statement released late Sunday detailing its latest strikes in Syria and Iraq.

The militants surround the enclave on all sides except the Turkish border to the north, leaving its lightly armed defenders from the Kurdish People’s Protection Units (YPG) unable to receive supplies or reinforcements.

The YPG’s links with the Turkish Kurdish rebel group, the Kurdistan Workers’ Party (PKK), mean they have so far received no help from Turkey, although Turkish premier Ahmet Davutolglu has said his government will do “whatever is needed” to prevent Kobane falling.

The Shiite movement has been fighting alongside the forces of Syrian President Bashar al-Assad inside Syria.
GNA

Hockey: Sapholda And Multistix To Face-off In Battle This Saturday

Kidi, Sarkodie And others Battle For VGMA Artiste Of The Year Award

Immigration Ladies Off To Battle In Elmina