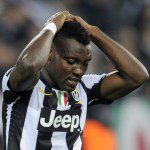 Ghana midfielder Kwadwo Asamoah faces further weeks on the sidelines after scans revealed on Sunday he could be out between four to six weeks.

The 25-year-old, has been slow in his recovery, leading to his exclusion from Juventus? pre-season squad so far.

The Ghana international underwent a further MRI scan on Sunday to determine the extent of progress made in the treatment room.

Asamoah suffered a crucial knee injury in December last year and has since not been the same with provisional scan revealing he will need more time before he recovers fully.

Juventus do not want to rush the former Udinese man as he will play a key role for them in the UEFA Champions League this term.

Asamoah suffered a career threatening knee injury which forced him out of the 2015 Africa Cup of Nations.

It appears the versatile player will have to wait a little longer before he makes his much-anticipated return to the squad.