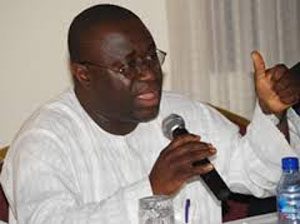 Professor Kwesi Anning, the Director of Academic Affairs and Research at the Kofi Annan International Peacekeeping Training Centre (KAIPTC), has underscored the need for statutory security agencies to exhibit high level of professionalism, accountability, transparency and responsiveness in the discharge of their mandate.

He said when security operations were not carried out in conformity with rule of law, frustrations and agitations it might take over orderliness as exhibited in recent clashes at Ejura, Nkoranza, Senya-Bereku as well as the ‘Arise for Change’ demonstrations.

“Security is not about having guns and hitting people around or by vigilantism. True security is when our mothers wake up 0230 hours traveling over 300 kilometres to shop and return without a hitch.”

“The manner in which we govern our security institutions either frustrate the citizenry or gives them the opportunity to owe allegiance to an external power. This must be resisted,” he stated.

Prof Anning gave the advice, in Cape Coast at the ‘Professor John Evans Atta Mills Memorial Heritage lecture’ to mark the 10th anniversary of the demise of late Prof Mills, the third President of the Fourth Republic of Ghana.

It was put together by the Governing Board of the John Evans Atta’Mills Memorial Heritage, chaired by Dr Alexander Segbefia, a former Minister of Health.

The colourful event interspersed with beautiful cultural exhibitions was held on the theme: “The Man John Evans Atta Mills – 10 years on”.

With series of lectures, the event sought to celebrate Prof Mills as an academic and an intellectual who exhibited braveness in venturing into the political arena and kept himself together to the end.

It brought together scores of dignitaries from academia, traditional and religious leaders, students and political stalwarts from the political divide in the Central and Western Regions.

Others were; Mr Samuel Atta Mills, younger brother of the late President and the Member of Parliament (MP) for Komenda-Edina-Eguafo-Abirem Constituency and Mr Nii Lante Vanderpuye, MP Odododiodioo Constituency among others.
Prof Anning described as ‘unfortunate’ the police and citizenry clashes particularly under the Fourth Republic, saying security governance institutions had failed to protect the citizenry but created fear and panic in communities.

“It has become quite obvious that since our independence period, the state’s inability to prosecute those who act in the name of the state to abuse the rights of citizens, have not been properly looked at.”

Good security governance according to him, must be underpinned by an effective and well functioning oversight security institution with a humanly approach as exemplified by late Prof Mills.

However, Prof Anning said the challenge of security governance was about restoring the fundamentals of security institutions and ensuring their sustenance through autonomous watchdog resilience.

That way, the security agencies would become responsive to the plights and the need of the citizenry they serve to ensure their services become equitable to all regardless of the geographical, political or ethnic persuasions.
Eulogizing late President Mills, Prof Opoku-Agyemang, who became the first female Vice-Chancellor of UCC commended him for his commitment to national peace and peaceful co-existence.

As side his personal commitment to enhancing education and infrastructural development, Prof Opoku-Agyemang urged Ghanaians, particularly politicians, to emulate the life and leadership style of the late Prof Mills.

She said the late Prof. Mills was transparent and hated corruption and distinguished himself as a selfless, honest and a God-fearing person who had compassion for humanity.