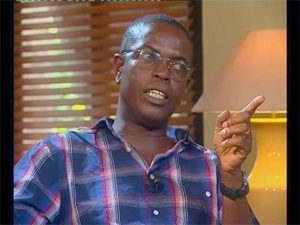 Managing Editor of the Insight newspaper, Kwesi Pratt Jnr has condemned the frequent demolishing of houses especially in a country where there is a deficit in housing.

?We always say we have 1 million housing deficit in the country but we are always demolishing houses?I have realized that some of these authorities demolish the houses to show how powerful they are; we must do this with a human face,? he said.

Hundreds of residents were misplaced on Wednesday January 22, 2014 when the Tema Development Corporation (TDC) razed down several buildings at Adjei Kojo in the process of reclaiming the land.

Member of Parliament for the area, Irene Naa Torshie Addo has expressed extreme outrage over the exercise and has even threatened legal action.

But according to TDC, the residents did not have the right to encroach on the land and moreover residents had been given several warnings and enough time to stop building and move out of the place.

Contributing to panel discussion on ?Kokrokoo? programme, Kwesi Pratt asked: ?does it mean constructions at Adjei Kojo were done on the blind side of the authorities? Those who have completed their building have even been given light and water; so those who provided them with such amenities didn?t know they were encroachers? What kind of society is this? Do you think about the pain you are inflicting on them?

Even if the right processes were not used to acquire the land, Kwesi Pratt says the authorities should have stopped them from the onset and not wait for the buildings to be completed before demolishing them.

?Most of the time, they demolish to create space for the affluent; for the rich to buy the land again. I think it is most unfortunate and regrettable. Why can?t we do it in a humanistic way; do we have to demolish the houses with everything in it? Why can?t you take inventory of the things? he queried.