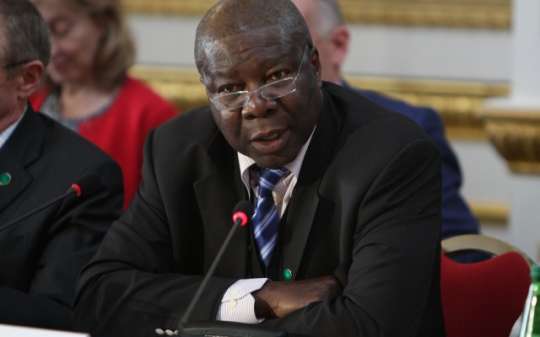 Nkrumah lives through his ideas – Deputy Chair-AU
The Deputy Chair of the African Union (AU), Kwesi Quartey, says Dr. Kwame Nkrumah still lives through his ideas and teachings.
“Dr. Kwame Nkrumah’s name would live forever because his ideas and teachings remain very much alive and relevant.
Ambassador Quartey said this, when he launched a book entitled, “Death of an Empire-Kwame Nkrumah in Ghana and Africa”.
He described Dr. Nkrumah as an extra-ordinary man, who had profound influence on Ghana and Africa.
“To him, African Unity was the most natural thing after independence,” said the AU Deputy Chair.
He praised Dr. Nkrumah for his visionary ideas such as his passion for the eradication of illiteracy and added that although he was physically no more present, Dr. Nkrumah had transformed into an idea that was very relevant in present times.
Mr. Ivor Agyeman-Duah, Editor of the book, said the history of nations, often held different interpretations for different people.
He said it was thus important to keep revisiting such history, in order to have better insight into events of that nature.
The nine chapter and 137 page book, has as its author, the late Kwame Sanas-Poku Jantuah, an apostle of Ghana’s first President, Dr. Kwame Nkrumah.
He was a member of his All African Cabinet, and for years served as Ambassador to France, Brazil and the United Kingdom.
A participant and witness in the history of the transition from Gold Coast to Ghana, Jantuah who died in 2011 at the age of 89, reflected and interpreted some of the major events of the 1950s and 60s, as well as foreign policy formulation.
The book also reflected on Ghana’s fourth republic and developments on the African continent since.
It is published by Digi Books Ghana Ltd.
GNA