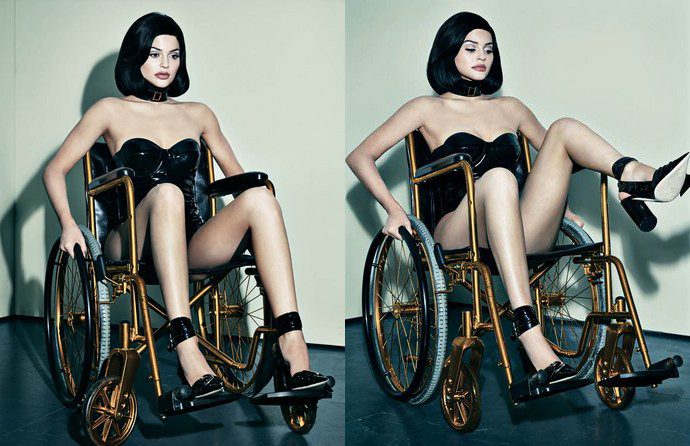 Kylie Jenner receives backlash over pictures of her in a wheelchair as part of her racy photo shoot for Interview Magazine. In two photos, the 18-year-old reality star posing in a sexy outfit while sitting in a gold wheelchair.

Emily Smith Beitiks, associate director of the Paul K. Longmore Institute on Disability in San Francisco, tells CNN of Kylie’s wheelchair photos, “It’s deeply disturbing. People with disabilities are already seen as powerless, and this just reinforces that. I think she’s literally being objectified made to look like a sex doll, and this wheelchair is an added element of passivity they’re adding on.”

Interview Magazine explains to about their decision to use wheelchair in Kylie’s photo shoot, “At Interview, we are proud of our tradition of working with great artists and empowering them to realize their distinct and often bold visions. The Kylie Jenner cover by Steven Klein, which references the British artist Allen Jones, is a part of this tradition, placing Kylie in a variety of positions of power and control and exploring her image as an object of vast media scrutiny.”
“Throughout the Art Issue, we celebrate a variety of women who are both the creators and subjects of their artistic work, and the Kylie feature aims to unpack Kylie’s status as both engineer of her image and object of attention,” the mag continues, “Our intention was to create a powerful set of pictures that get people thinking about image and creative expression, including the set with the wheelchair. But our intention was certainly not to offend anyone.”