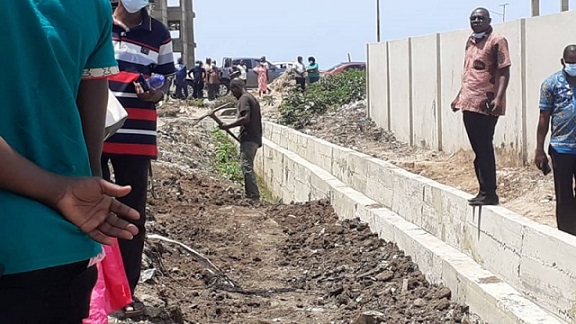 Reverend Solomon Kotey-Nikoi, Municipal Chief Executive (MCE) for La Dadekotopon, has expressed satisfaction about the ongoing and completed infrastructural projects in the municipality.

Rev. Kotey-Nikoi said the Assembly would organize a meeting with local corporate institutions to solicit for support as part of the Organisations’ corporate social responsibility to ensure participatory development.

The MCE said this on Thursday during an inspection tour of ongoing and completed projects within the municipality, together with some Traditional leaders and staff of the Assembly.

At the La Royal Cemetary, Rev Kotey-Nikoi said the Assembly had fenced the land to ward off encroachers and those who dump refuse.

On the ultra-modern constructed La Market, the MCE said the market was 30 per cent done when he assumed office but through his leadership and the support of all stakeholders, the market was now ready for use.

The Assembly, Rev Kotey-Nikoi said, had completed a 12-unit classroom block for the La Presby SHS to create space to admit more students.

He said the expanded school infrastructure in the Municipality would enhance effective and efficient teaching and learning.

Rev Kotey-Nikoi said the Assembly would continue to embark on projects in the area focusing on security, drainage systems, education and job opportunities to ensure holistic development in the community.

Nii Oteng Granky I, Abafum Chief in La, commended the leadership of the DCE in spearheading development projects in the Municipality.

He expressed satisfaction about the construction of the drainage system in La Agyeman, saying the project when completed would stop the perennial flooding in the vicinity.

He said the classrooms being built would eventually reduce the 80 students per class to 40,whuch was ideal for effective teaching and learning.