A ground breaking ceremony has been held on last Wednesday at the La Town Park at Labadi in Accra, for the construction of a Two Million Ghana Cedi (GH¢ 2,000,000.00) Ultra Modern Astro Turf for the community.

The sod-cutting was performed by the Minister of Youth and Sports, Isaac Asiamah, who was assisted by the Municipal Chief Executive (MCE) of the La Dadekotopon Municipality, Gladys Tsotsoo Mann-Dedey.

The facility, which is being constructed at the La Town Park by the Wembley Sports Construction Company Limited (WSCCL), a solely owned Ghanaian company at the cost of GHC 2 million would take four months to complete.

The Manager of WSCCL, Nana Antwi, pointed out that, his outfit has an arrangement with Omnibank to support other prospective clients with similar intentions. However, the company was on a project dubbed: “One Constituency, One Artificial Football Park.

He also indicated, the project adds up to the many artificial parks constructed by Wembley Sports Construction Company Limited, which is currently on other sites including Kyebi Zongo, Walewale Zongo and Madina Zongo, for same projects.

He added, “We hope that, there will be one artificial football turf in at least every constituency in Ghana.”

In her address, the MCE of La Dadekotopon, Mrs. Mann-Dedey, lauded the initiative of McDan Group to develop the area by providing the youth with an astro turf.

Adding that, the artificial park when completed would help unearth talents in the community. Nonetheless, the assembly has entered into a Memorandum of Understanding with the McDan Group to construct the astro turf.

She noted, “This is a laudable initiative and my outfit endorsed it by giving our blessing. We believe the construction of this turf would help unearth football talents and keep the youth in the community busy.”

On his part, the Chief Executive Officer of McDan Group, Daniel McKorley, said he was pleased to give back to the society that had impacted a lot on his life.

Explaining that being a son of the soil, it was always his pleasure to ensure the youth in La Dadekotopon get multipurpose sports facility to nurture their talents.

The Minister of Youth and Sports, Isaac Asiamah, on his part said, the initiative formed part of government’s vision to ensure every community gets a multi-purpose sports infrastructure.

He also said, the project is envisaged to help identify and nurture sports talents in the community and as well as every parts of the country.

He urged them to own the project, support the contractors and McDan for its successful completion and also expressed his profound gratitude to McDan group of company Limited for his continuous contribution to the nation’s development and asked God’s blessing upon him.
The Member of Parliament (MP) of La Dadekotopon, Hon. Vincent Sowah Odotei, commended McDan Group for his decision to put up the edifice, and urged the good people of the community to get involved in the activities of the project.

He therefore called on the people to exercise good maintenance culture after its completion, in order to sustain it. 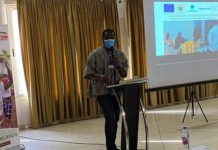 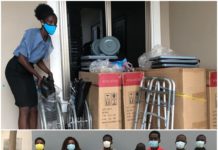 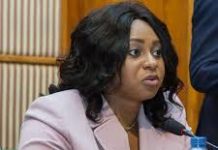