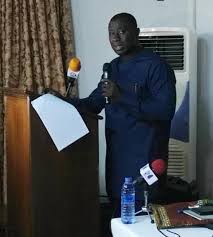 The La-Dadekotopon Municipal Assembly (LaDMA) has marked the World Toilet Day on the theme: “Toilet and Sanitation for All” with a call on authorities to take action to end open defecation.

The Day was officially endorsed in July 24, 2013 by the United Nations (UN) 67th General Assembly and is commemorated by the 139 member states including; Ghana every year.

This enable the member countries to engage in activities that promote global sanitation to help achieve the Sustainable Development Goal six (SDG 6) by the year 2030.

Mr Patrick Yaw Boamah, the Deputy Minister of Sanitation and Water Resources said WHO/UNICEF reports indicated that about 673 million still practised open defecation, saying; “You can imagine how these people could lift themselves out of poverty because of the implications for their health and safety,” he said.

He said globally, the source of drinking water for two billion people was contaminated with faeces and 297,000 children under five years were estimated to die each year from diarrhea as a result of unsafe water.

Mr Boamah said the theme for this year’s commemoration was appropriate and thought-provoking as it was about inspiring action to tackle the global sanitation crisis and help achieve SDG ‘6’.

The Deputy Minister said the “leave no one behind,” concept adopted by the Ministry was to work to remove the stigma and taboos around sanitation and accelerate efforts towards help the marginalised.

He said: “We will also guarantee that the regulatory and the legal frameworks recognise the right to sanitation for all people, and funding will also be increased and effectively targeted at those who need it most.”

Mr Boamah said the Ministry together with its key stakeholders have rolled out a number of interventions such as GOG/UNICF Wash Programme based on the Rural Sanitation Model and Strategy (RSMS), a strategy for ending open defecation in Ghana.

“The RSMS is also aimed at changing behaviours, creating the demand for constructing and using toilet and its associated hygiene practices,” he said.

He said under the implementation of RSMS, the Nandom District in the Upper West Region with a total of 88 communities, attained a District-wide Open Defecation Free status, while some 130 other districts in all the 16 regions were working to end the sanitation crisis.

Mr Vincent Odotei Sowah, the Member of Parliament for the La-Dadekotopon, later took the Deputy Minister round to inspect one of the Greater Accra Metropolitan Sanitation and Water Project (GAMA-SWP) at the St Maurice Roman Catholic Junior High School to acquaint himself with the modern facility.