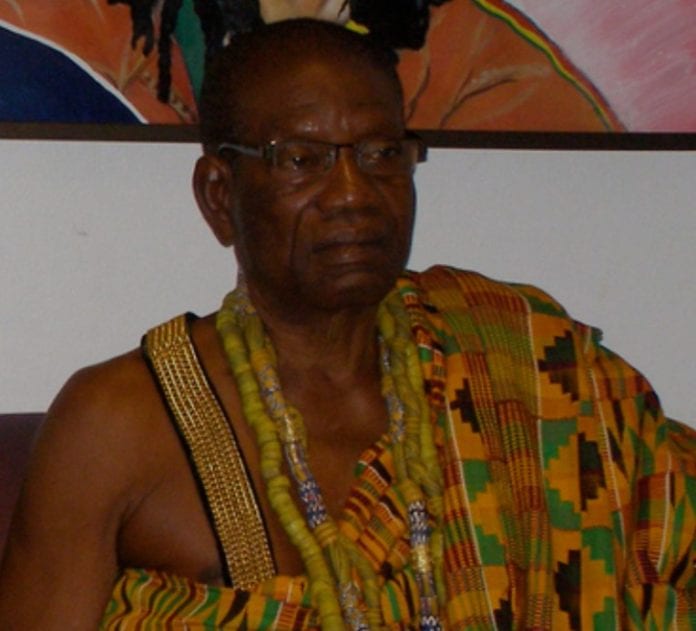 Ahead of the La State 2018 Annual Homorwor durbar, in Commemoration of 30 years of relative peace and stability of his enstoolement as Chief of La Township, together with the installation of Nii Yemoh Din ll as La Akwashonggtse and Nii Obodai Adai lV as La Mankralo, HRM Nii Dr. Kpobi Tettey Tsuru lll, has urged citizens of La to take advantage of Government’s Free S.H.S Policy, to help educate their wards to become competent Leaders in the future.

Scheduled to take place on Saturday 17the November, 2018, HRM Nii Dr. Kpobi Tettey, in a media interaction on Thursday, 15th October indicated that, the people of La were patiently waiting for their own share of the One-District One Factory project (1D1F) to employ some of their youth in order to reduce the unemployment rate in the area.

With deep sense of humility, Nii Dr. Kpobi expressed his immense gratitude to the members of the La Traditional Council for their unwavering support and co-operation for steering the affairs of the peacefully stabled and beautiful Township of La. “I also thank all citizens of La for these years of relative peace and stability under our leadership. We appreciate all the efforts of our Youth Groupings in moving our Township forward,” He added.

According to HRM Nii Dr. Kpobi Tettey Tsuru lll, “The journey has not been full of roses. We have had our ups and downs as a people; La Beach Resort administration issues, Trust Land administration issues behind the Ghana International Trade Fair, Court Cases, occasional differences among ourselves Traditional Rulers, just to mention a few are the issues that we strongly believe the Almighty God will guide us to go through.

Let us continue to forgive one another, forbear one another and to forge ahead as a united, loving, peaceful and stable Township for continuous wellbeing of our people.”

He noted that, as they reflect on the theme of this year’s Homorwor celebration, “Thirty (30) Years of Relative Peace and Stability”, “There is the need to remind ourselves that it is not by our might, nor by our power, nor by our authority as traditional rulers of this beautiful township of ours. Rather, it is by the mercies of God, and divine wisdom and directions from the Almighty that has brought us this far.

” ‘Thirty Years of Relative Peace and Stability’….and so what? As critics may rightly ask. It is not an overstatement to indicate that, these three decades of peace and stability have been immensely beneficial, not only to the people of our great ancient La Township, but also to national socio-economic development at large, He indicated.

He however seized the opportunity to thank the Almighty God for how far he has brought them and appreciated the office of His Excellency the President of the Republic of Ghana, Nana Addo Dankwa Akufo-Addo, for his assured readiness to help tbem repossess La Lands from the Ghana Armed Forces which were wrongly, forcefully and illegally taken over by the Army.

Ably assisted by the La Traditional Council Members, Nii Dr. Kpobi Tettey Tsuru lll, said, “However modest it may seem, we have been able to chalked some achievements. Prominent among such milestone achievements are as follows;

Through the relentless efforts of our Traditional Rulers, as well as other prominent La citizens, the La Township has been blessed with Municipal Assembly called, “La Dadekotopon Municipal Assembly, LaDMA” for short. This development has created a lot of job opportunities for our people, improved the socio-economic wellbeing of the citizenry, undertaking a lot of development projects within the Dadekotopon catchment area, and lastly but not all, the recently constructed beautiful La market by the Assembly. All these developments and many more are happening as we speak now because we have had our relative peace and stability.

In a land where there are fierce and deadly battles among feuding factions with regard to chieftaincy matters, it would be extremely inconceivable, if not impossible, for any government to gracefully bestow on such a township a status of Paramountcy. Thankfully, by God’s Grace, by Allah’s Will, the La State, through the untiring efforts of our Traditional Council and some La citizens, has been given a Paramountcy Status. Simply put, this attainment means a lot for township and local governance administration.

Related to the Paramountcy Status has come the construction of the La Traditional Council Office building. Today, we have such an edifice where we sit in council to receive State Officials, other dignitaries, our citizens, corporate bodies, pressure groups, identifiable bodies, and all other people and individuals as part of our day to day operations and administration. We thus have our peace of mind; the benefits are enormous. This has come about as a result of relative peace and stability.

Under our leadership, La Mansaammo Kpee was given parcel of land where it has constructed its office premises, the mentioned Community Clinic, and recently established Radio LATENU on the same parcel of land. These combined efforts of the Traditional Rulers and La Mansaamo Kpee have thus created a lot of employment, income, and revenue generation for the State.

The heart of the La Township has been blessed with a Senior High School- known as “La Presec”, to cater for the educational needs of our children. The instrumental role played by the Office or the La Chief and traditional authorities is written in gold in the history of the school.

Undoubtedly, the La State has immensely contributed towards the socio-economic development of our country. For instance, the La State can boast of the presence of the Airport City Project with its economic benefits to the State, the International Airport, buildings accommodating top-government officials, offering space for the Military, World-class Hotels that can host international State Officials, the Legon University Project, just to mention a few.

Library and Computer Lab Project
As part of the 30 Years Anniversary celebration, discussions are underway to bequeath to the La State a befitting, modernized “Library and Computer Lab Project” for our children’s education. Had the drawings been finalized, we would have displayed it here for all of us to see. When we start, where to site it, and when to complete are being discussed as I speak now. The project is being designed to come with a mini-supermarket and a restaurant.

• Establishment of a Teacher Training College

It is my expectation that we strategize to kick-start the process of having a Teacher Training College established not far from the heart of the Township. To this end, we will look forward to receiving further engagements with our state officials and government functionaries present here to have this realized, even for our generations yet unborn.”