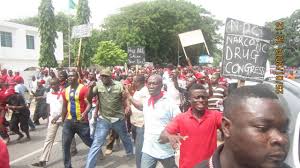 The forum gave social partners and labour unions the opportunity to interact on issues arising out of the implementation of the Single Spine Pay Policy (SSPP), which are mainly policy implementation related-disputes.

Dr Mrs Bernice Welbeck, the Acting Executive Secretary of the NLC, said the Commission had identified and consolidated such issues to be discussed to enable the participants to engage and chart positive ways on how to manage and address them, especially in this election year.

She said the forum was part of a strategy, being implemented by the NLC, to ensure that as much as possible social partners in the employment relationship develop the attitude of prevention instead of resolution.

” This means, in the coming years the NLC’s focus will be to identify sector-specific issues and plan programmes to assist in addressing them,” she noted.

Dr Welbeck said since the implementation of the SSPP, a number of complaints had been received, especially from the Health and Education sectors, which were continuously recording high number of disputes each year.

“Our records show that every year, the NLC records an average of seven disputes from organised workers groups in the Public Service either by way of complaints, threats of industrial action or withdrawal of services,” he said.

Mr Edward Briku-Boadu, the Chairman of the NLC, said with the implementation of the Policy, the NLC had received a number of complaints filed by public sector unions and associations as well as recorded for a number of labour agitations from the public service ranging from the issue of placement of allowances.

He said while the NLC acknowledged the Fair Wages and Salaries Commission (FWSC) as the governmental agency charged with the implementation of the Policy, it was unclear as to who was in charge of managing the employment relationship at the sector level.

Mr Briku Boadu said there seemed to be lack of proper coordination between the management of the various Ministries, Departments and Agencies and the FWSC which is a major challenge to the effective resolution of disputes arising out of the implementation of the policy.

The lack of clarity was one of the major sources of disputes, he said , adding, that if there was effective communication between the sectors involved, the Agencies and the FWSC, the disputes would have been minimised if not completely avoided.

Mr Briku-Boadu said the issues had been consolidated and presented include: job re-evaluation and re-grading, placement on the SSSS, conversion difference, payment of incremental credits, payment of allowances, book and research allowance, development of conditions of service, payment of outstanding vehicle maintenance allowance, review/negotiation of collective agreement, payment of transfer grants, outstanding promotions and ban on recruitment.

Mr George Smith-Graham, the Chief Executive of FWSC, said they had concluded on the conditions of service of doctors, nurses, and health sector workers except the Ghana Hospital Pharmacists Association.

He said Ghana Statistical Service carried out a labour market survey last year and the report was before a technical committee ,which when released would come out with market premium , which would cater for the critical skills, which should be in short supply.

635 Communities In UWR Not Connected To National Electricity Grid – Minister

Stakeholders call for a forum on Fiscal Regime in Petroleum Industry