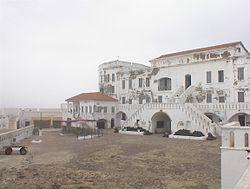 Mr Clifford Ashun, the Central Regional Head of the Museums and Monuments Board (MMB) has commended government for its resolve to establish an airport in the historic and academic city of Cape Coast.

Speaking in an interview with the GNA in Cape Coast, Mr Ashun said international tourists land in Accra before traveling to the tourism hub in Cape Coast.

“Some important international personalities have had their flights cancelled due to the hours they would have spent on road especially from Accra to Cape Coast. Therefore, an airport in Cape Coast for a direct flight is timely and would increase revenue and boost tourism,” he noted.

The New Patriotic Party (NPP) in its Election 2020 Manifesto indicated its readiness to build an airport in Cape Coast, which generated public debate with some people with the view that the NPP government was only using it as a political gimmick to win votes in the Central Region.

Some argued that there was no need for an airport in Cape Coast, which is just a three hour drive by road from Accra, where the Kotoka International Airport (KIA) was located.

Others have called on government to concentrate on building a dual carriageway from Accra to Cape Coast and build a rail network to ease commuting difficulties.

But, Mr Ashun downplayed these views, stating that the intervention would give a strong boost to local tourism and increase visitations to the Cape Coast and Elmina Castles.

It would also expand the local economy, increase government revenue and create employment to improve the living conditions of the citizenry.

He regretted how COVID -19 pandemic had slowed bussiness, patronage and international deals in the economy, adding that the GMMB would have gained more revenue from the year of return to help improve national development and boost the economy, he noted.

However, Mr Ashun said, the MMB undertook virtual tours at the Cape Coast and Elmina Castles following drastic reduction in clients visitations in the wake of the ravaging impact of Covid-19.

He highlighted the significance of virtual and educational tours to include; queue-free, no peak or rush hours and never closed for maintenance, allowing all the luxury to explore at convenience.

Using a smart phone, he said, the initiative would give children wild experiences, which they never see in person to learn something interesting and memorable as it combined audio, visuals and technology to engage intuitively.

He expressed shock of dramatic reduction in local and foreign visitations after months of easing COVID-19 restrictions by President Nana Addo Dankwa Akufo-Addo.

“With July, August and September being our peak period, we expected a sharp increase in local and foreign visitations, though the charges have not changed, the local tourists, who form 60-70 percent of our clients did not show up,” he lamented.

Among others, he announced plans to scale up community-community, market-market, religious organizations, schools and media sensitisations to offer concrete testimony to the drama of human history and witness one of the world’s most tragic events-the Slave Trade.

Mr Ashun indicated that rebuilding the tourism sector and providing tourists with rewarding experiences was the Board’s renewed focus to explore alternatives to mass tourism amidst strict adherence to COVID-19 protocols to ensure safety of all revelers.

He was however hopeful that with quarantines easing of flight schedules, tourism would in no time show signs of returning, but cautioned that for the tourism industry to return as a full economic force, all stakeholders must get involved.

He urged government to involve the Ghanaian populace by informing and educating them on government initiatives and programmes for increased patronage of made in Ghana goods to gain more revenue.