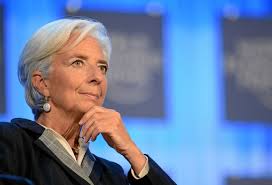 International Monetary Fund (IMF) chief Christine Lagarde has been charged with “negligence” over a 400-million-euro state payout to a businessman when she was French finance minister, French media reported on Wednesday. Lagarde was questioned Tuesday for a fourth time over the affair by a court that investigates ministerial wrongdoing, Mediapart news site reported.

At the end of the session, Lagarde told AFP news agency, the court’s commission of investigation had decided to charge her with negligence.

Asked whether she would resign her post Lagarde, who has always denied any wrongdoing, replied “No.”

“I’m returning to work in Washington as of this afternoon,” she said, adding she had instructed her lawyer to challenge the decision.

Neither Lagarde’s lawyer nor the prosecutor’s office were available for comment.

The case revolves around Lagarde’s decision to refer a long-running dispute between the government and businessman Bernard Tapie over the sale of his sportswear company Adidas to an arbitration panel.

The mediators ordered the state to pay Tapie 400 million euros in compensation – a figure far in excess of the amount he might have expected to win had the matter been left to the courts.

Lagarde overruled her advisors in pushing for a settlement.

Tapie’s support for then president Nicolas Sarkozy during his 2007 election campaign sparked suspicion of a sweetheart deal to benefit the businessman.

Five people, including Tapie and Lagarde’s former chief of staff in the finance ministry, France Telecom boss Stephane Richard, have already been charged in the case.

Lagarde’s role in the affair is being investigated separately by the Court of Justice for the Republic.

Until now, the court had declined to bring charges, placing her instead under the status of key witness in the case.

A person is charged with an offence in France when the investigating magistrate is satisfied there is “serious and corroborating evidence” of wrongdoing.

At the end of the investigation the person is either ordered to stand trial or the charges are dropped.

So far the IMF has backed Lagarde, who took over the job after her French predecessor, Dominique Strauss-Kahn, quit in 2011 to fight charges of sexual assault.