News Ghana
Home Inside Africa Nigeria Lagos state will be safe before, during and after the elections ?We don?t have a candidate ? US 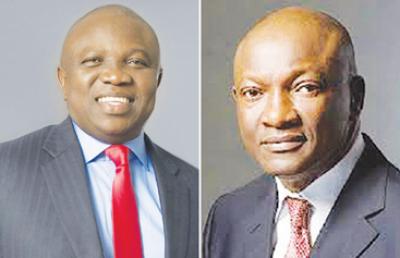 by Segun Adio and Kwasu Alhamdu

Two major governorship candidates in Lagos State, Mr. Akinwunmi Ambode of All Progressives Congress (APC), and Mr. Jimi Agbaje of Peoples Democratic Party (PDP) have declared that the state would not burn before, during and after the general election.

This was their joint commitment which they made at the residence of the Consul General of the United States of America Embassy in Ikoyi, Lagos witnessed by Ambassador James Entwistle.

The two candidates were made to sign a Peace Pledge at a short ceremony where some faith leaders also signed as witnesses to the peace pact.

Speaking after the signing of the peace deal, both candidates pledged that their supporters would conduct themselves in an orderly manner throughout the election period.

First to speak was Ambode, ?On behalf of my party, the All Progressives Congress, I want to assure Lagosians that I will make sure that this campaign go smoothly in a manner that there will be no violence.

?Our supporters shall do nothing to set the state on fire, no matter the outcome of the polls. We are only committed to a free and prosperous Lagos and we are happy with our supporters, so far as they have remained peaceful?, he said.

On his part, Agbaje assured the people of the state of his supporters? orderly conduct throughout the process, while reiterating that the state would not burn on account of the result of the polls.

?We are pleased with how our supporters have been conducting themselves. They have to continue to remain law-abiding and respect the opposition. It is our duty to ensure that this election does not translate to violence while we are assuring Lagosians that we will ensure non-violence?, he added.

Entwistle, however, urged the two candidates not to use their body language to cause crisis among their supporters.