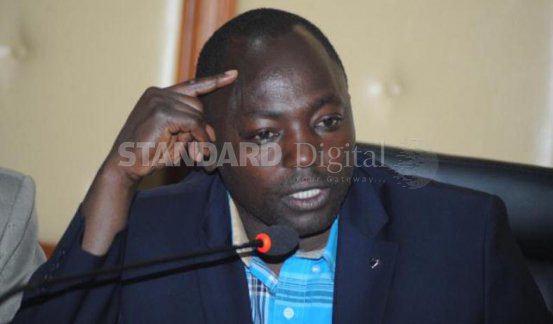 Laikipia Governor Joshua Irungu when he appeared before the Senate Public Accounts Committee last year. An MCA has tabled an impeachment motion against him.

?The notice of motion that was presented has clearly stated the grounds for impeachment as required by our standing orders and are in line with article 181 of the Constitution,? Mr Mariru stated.

The MCAs accuse Irungu of gross misconduct and abuse of office.

The ward reps also accuse the governor of gross violation of the law, violating of the Public Procurement and Disposal Act as well as the Public Finance Management Act.

The governor has however defended himself against the accusations and blamed his opponents, who he says are envious of his political record.

?These are my political opponents who are fighting me but I can assure you that the truth will always prevail. I urged the people of Laikipia to ignore these people and join me in developing the area,? he said.

The impeachment motion was approved after a third of the MCAs appended their signatures on the verification form.

But a heated debate ensued last Wednesday after Githiga Ward Rep Peter Thomi claimed he and other members had not signed the form, terming it as forgery.

Irungu said his office had never engaged in any corruption activities, abuse of office or violation of the law.

Speaking at Ol moran trading centre, where he had gone to inspect development projects, the governor put a brave face, maintaining the move to impeach him was doomed to fail.

The Speaker observed that more than a third of the members had appended their signatures on the verification form as required by the law, which is a prerequisite indicating their support for the motion.

But the announcement sparked protest from Githiga Ward Rep Peter Thomi, who claimed his signature had been forged.

Mr Thiomi said he and a few other members did not append any signature on the motion.

?I can state categorically that I, and several other members, did not sign the verification form in support of this motion and I wish to withdraw,? Thomi said.

But Mariru remained unmoved by the claims, saying the Standing Orders were categorical that the signature could not be withdrawn.

?The Standing Orders are clear that we cannot withdraw the signature, but any member is free to support any side during debate of the motion,? said Mariru.

The motion will be placed on the order paper after seven days and members will debate it within three days.

Mr Mariru said the Assembly will proceed with the motion strictly guided by both the substantive laws as well as the procedural laws.

The notice of the impeachment motion was filed on the same day that Governor Irungu failed to turn up at the Assembly for a State of the County address, despite an earlier communication that he would attend.

Mariru told the House that the governor was not in a position to attend the session, adding that he would communicate his availability later.

There was however no communication from the governor?s office over why he failed to address the Assembly.

?I am a member of the house business committee and this morning session was committed to listening to the governor?s address,? Muchiri said.

The members vowed to teach the county boss a lesson, noting that Irungu was trying to hide from the wrath of the assembly members.