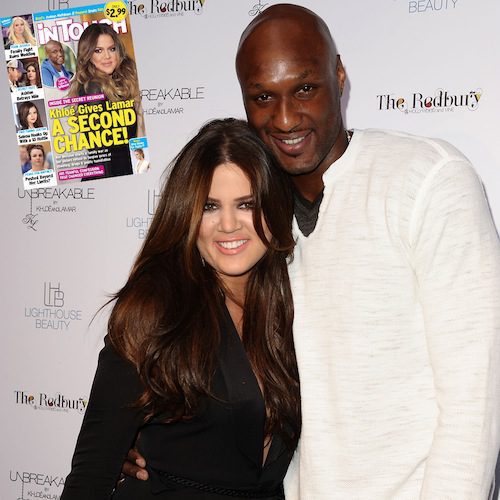 Three months after Khlo? Kardashian filed for divorce from Lamar Odom, he is still on a mission to make their marriage work.?He pours out his heart?only?in the new issue of?In Touch?? on newsstands now.

“I want to make it work with Khlo?,” a hopeful-sounding Lamar exclusively tells?In Touch?while at his hotel in NYC,?where he?s undergoing physical therapy before returning to LA.

The former NBA player has been making efforts to get his life back in order, just?returning to the states from Spain, where he?d been playing for the Baskonia basketball team until a back injury ended his season. “I’m focusing on getting better,” Lamar tells?In Touch.?And his efforts might be working with Khlo?.

A family insider shares that Khlo? is giving her troubled relationship another chance, despite warnings from friends and family.

?He confessed his feelings and cried his heart out to her on the phone,? the family insider says of a game-changing?mid-March phone conversation. ?She?d been avoiding his texts and calls for weeks, but when she heard him pleading with her to take him back, she melted.?

On March 16 ? the same day Lamar declared his intentions to?In Touch?? Khlo? hinted at a major thaw with a telling message on her Instagram page. ?I declare that I will live as a healer,? she shared. ?I will lift the fallen, restore the broken and encourage the discouraged. I am full of compassion and kindness. I won?t just look for a miracle; I will become someone?s miracle.?

Many Marriages Dying Due to In-laws Interference