A notorious land guard popularly called Azumah is reported to have led a group of thugs to Botianor where they visited a land belonging to Nii Kojo Mensah I, Manklalo of the community, and beat everyone in sight.

The group according to information, crowned their dastardly act by shooting three men who are currently on admission at Korle-Bu Teaching Hospital.

Interestingly, when the issue was reported to Kokrobite police station, the commander rather caused the arrest of some of the complainants to the amazement of residents.

Information received indicates that the land guards who were brought to the police station showed no respect to the police officers, and even threatened to kill anyone who accesses land in the presence of the police.

According to sources, Divisional Investigators at Kokrobite police station are in contact with these land guards hence any case reported at their outfit are handled with kids’ gloves.

In an interview with Nii Kojo Mensah I, Bortiano Manklalo pointed out that on the day of the incident, he was called over the disturbances on his land and he quickly informed the Divisional Commander about the incident.

“A Patrol team was immediately dispatched to the area. Apparently, the land guards laid ambush and opened fire when they saw the police and the people. When we got back to the police station, the Commander requested that the people shot to be taken to the Korle-Bu Teaching Hospital for treatment.” 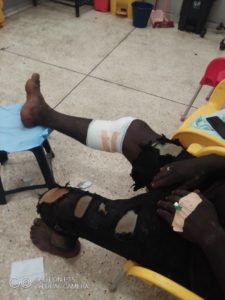 According to him, when they got back to the land, they saw the Kokrobite police officers with the land guards having a friendly and hearty talk.

“Immediately the land guards saw us they pointed fingers at one of the eyewitnesses claiming he was one of the attackers.

The police came in and handcuffed the boy rather than attacking the land guards. How can you arrest somebody who is unarmed leaving the ones who were with guns,” the Manklalo narrated.

He also narrated some incidents that happened years back involving him and the said Azumah.

“This Azumah once invaded my house and shot at me. He was pursued but he runs away leaving his car behind. The car was sent to the Regional Police command for some time he wasn’t coming so a search was conducted on the car. Offensive weapons and boxes of weapons were found in the car,” he said.

He said: “This same Azumah is now walking free with is a group of land guards shooting and killing innocent people over their legally acquired lands.”