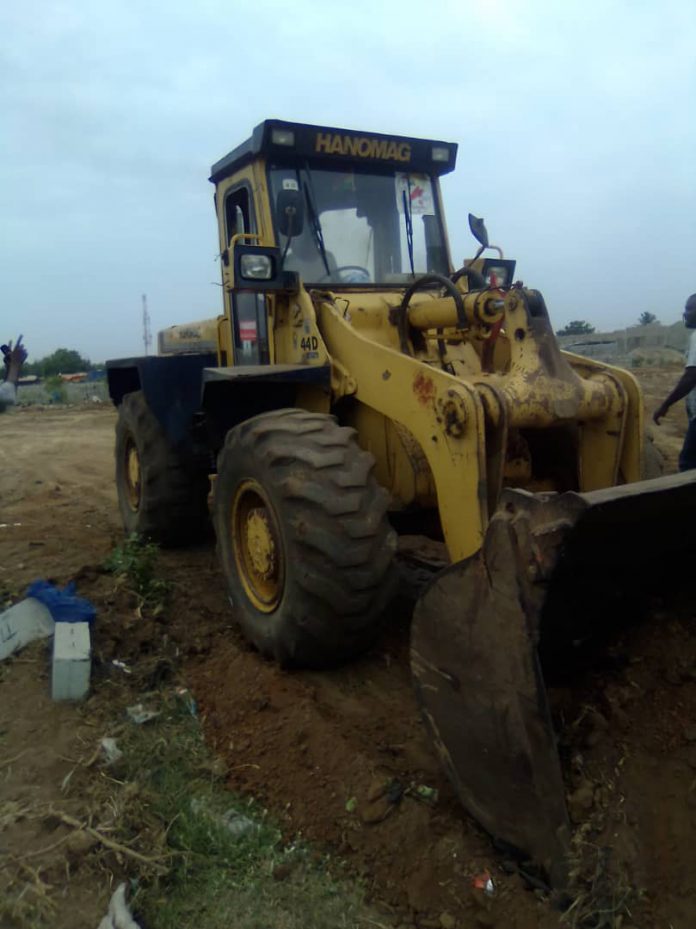 An Ex-military man, Ahmed Ransford Tetteh who is allegedly widely known to have been terrorizing residents and developers within the Gbetsile and Obeye communities within the Kpone Katamanso Municipal Area is alleged to have led a team of notorious landguards and soldiers to destroy peoples’ buildings under various stages of construction last Friday.

This is part of the several times residents are complaining about the activities of the said Ex military man who is said to be working with the disputed Gbetsile Chief.

According to the residents and developers, they constantly live in fear due to the activities of landguards and soldiers by some persons who claim to be the rightful owners of the Obeye land.

These landguards according to residents often wield sticks, machete and sometimes guns which they use to frighten developers.

Some of the fear gripping residents says, apart from destroying their properties, developers who attempt to enquire why the demolition of their properties without any court order, they are subjected to physical assault.

A resident, Isaac Amankwah alleged that, “on Wednesday May 5, the Ex-military man was seen with a team of landguards and an earthmoving machine to the site to destroy several buildings at various level of construction. When we saw him, we approached him to enquire why he was doing that without a Court order but unfortunately we were assaulted.”

One other resident who gave his name as Kofi said, “In fact this Ex-soldier is really a thorn in our flesh because he keeps terrorizing us day and night. Although we have acquired our properties legally, we are constantly chased out on our own land by these landguards who claims to work for the disputed Gbetsile Chief.”

While preparing for press, the residents again called to complain of a fresh demolition of a self-contain apartment and a fence wall on Saturday dawn.

“We woke up this morning to see this project demolished by some faceless people we are yet to find out. This is bad and we are tired of complaining over the same thing,” an affected resident said.

“Several complaints to the local police in the area have not been successful. Why must we be terrorized like this on our land,” they complained.

Meanwhile, the Ex-military man, Ahmed Ransford Tetteh when contacted denied the allegations and said Gbetsile is a Stool land and not a family lands so it high time the people accept that fact and get the right things done.

“Anyone who says Gbetsile is a family land is not being honest. Gbetsile is a Stool land with a committee in place that takes care of the preparation of indenture and the alienating of land,” he noted

Mr. Tetteh further denied the allegations that he is responsible for the demolitions and leading thugs to terrorize developers.

Gbetsile and Obeye for some time now have been in the news for the bad reasons as several residents and developers complain of living in fear due to constant attacks by landguards and armed robbers.