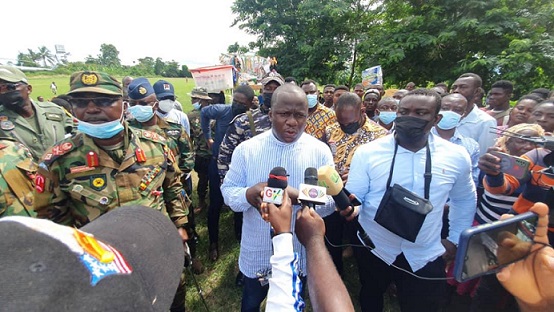 The Minister of Lands and Natural Resources, Mr Samuel Abu Jinapor, on Tuesday, embarked on an aerial (helicopter) tour over the Pra River Basin, which covers the Central, Western, Eastern, and Ashanti regions.

The tour was to ascertain for himself the progress made so far regarding the protection of the country’s water bodies and forest cover since the Operation Halt started on April 28, this year.

The Minister was accompanied by top military officers, officials from the Ministry Lands and Natural Resources and the media.

At Anyinam in the Atiwa East District of the Eastern Region, the Minister appealed to the residents to help the Government to curb the illegal mining menace.

He also pleaded with them to form cooperative associations to help obtain the requisite support from the government to boost their businesses.

“You must also plant trees after your mining operations to protect our rivers and increase our forest cover,” he said.